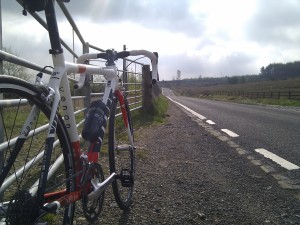 I’ve been riding the Vitus Venon for a couple of months now, on and off. The main thing I noticed early on was how much stiffer it was compared to my old bike. The posh carbon frame of the Venon is definately lighter and has that slightly clichéd ‘responds to every rider input’ quality that makes my old carbon frame seem quite baggy in comparison.

These are all good things.  The wheels however have been swapped for posher ones – I had some nice Ultegra wheels so on they went and they improved the quality of the ride. Still just as responsive but a bit comfier. A bit lighter too. I like that. I’ve also swapped the compact chainset for my Ultegra 53/39 double – there’s no problem climbing with the taller gears on a bike this light and responsive, plus it’s well planted and doesn’t wobble when pedalling downhill at silly speeds.

I’ve also finally built the new Ragley TD:1 – I’ve been racing on one of the two prototype TD:1s for some time now and it’s been nothing but superb. The new one is a production frame so it’s a bit posher but essentially it’s identical – which is a very good thing indeed. The lack of suspension is mostly not a problem, in fact it’s often an advantage. I’ve ridden a few 29ers in the past and this honestly is the best-handling 29er out there.

The results both me and Dave have had on these bikes speak for themselves so I’m ‘super stoked’ and perhaps even a bit ‘amped’ to now have two of them ready to roll at 24 hour races this year. Hopefully I’ll have an engine as good as the bikes