Apparently it’s been a long time since there was a cyclocross race in Heaton Park. I know there’s not been one for as long as I can remember (cos I can’t remember there being one)…anyway. I was sat on the sofa, having a coffee just half an hour to the start of the vets race. Finished my coffee, rode half a mile to Heaton Park, signed in and got ready for the off. When getting to the start of a race normally involves the best part of a week packing, preparing multiple bikes and getting a caravan loaded up the day before, this was sheer luxury. 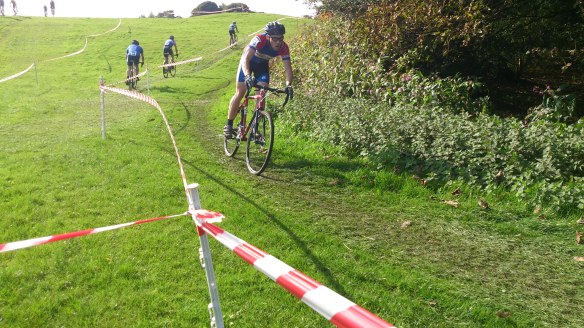 I started in my usual mid-pack position without much of a warm-up and without a practice lap. Maybe I shouldn’t have had that coffee after all…

The course, given Mick at Manchester Wheelers had to presumably keep the whole thing “compact” and unobtrusive for this year at least, was brilliant fun.

Nothing too tricky but it flowed fantastically well and had a number of short but very steep climbs up the grassy slope near the Papal monument – the same grassy slope that I used to ride my old Marin up and down yonks ago. An ace rooty section through a wood and some steps to run up and a couple of barriers to hurdle (repeatedly trip over, in my case).

I had some little battles with other riders, didn’t crash, didn’t get lapped by the leaders and finished in 12th place, which I think is my best result in a ‘cross race ever. To celebrate I went home, had a butty, swapped bikes and headed for the hills for a few hours.

windier than it looks

The cyclocross league lasts throughout the winter and whilst I’m looking forward to future rounds in glamorous locations such as Clitheroe and Liverpool, my next two MTB races will probably ensure that “12th” is as good as it’s going to get for quite some time…