It was 2005 when I last raced at the Enduro 6 (it was called the Enduro Plus back then, no idea why). I can’t remember my final placing last time but it would more than likely have been ‘somewhere in the middle’. I’d be lying if I said I didn’t expect to do much better this time….

After a rough night trying to get to sleep due to sharing a caravan with a relentlessly farting dog (who was ejected to the awning around 1am), I got ready and lined up with Budge and Shaun for the run that would start the race. For some reason the mile-long run seemed to be much harder than it should have been…perhaps the dog gas had damaged my lungs! Eventually I made it back into the pit, stuffed the spare tube, tool, emergency gel and co2 into my jersey pockets and made my way with the bike through the melee out of the pit area and onto the bike to start my first lap.

POW. Woohoo I felt fast. I had no idea if I was fast enough to do ok and to be honest I had no idea of how well or otherwise I was doing throughout the whole race . I did know however that I’d had a crappy start (again) but now I was back where I could probably start to do some damage. I was picking people off without any fuss (apart from one or two exciting elbow-y moments) and managed to avoid most of the bottlenecks to record a reasonable first lap.

The second lap was about 6 minutes quicker, the 3rd was quite nippy too. I was feeling good.

After 3 or so hours I started to feel nauseous. It’s never happened to me before – I’ve heard many stories and seen several people struck down with horrid sickness in long races (especially 24 hour races) so knew that it was common, but up until now I’d got away with it. It would wash over me in waves, a bit like when you would read a comic in the back of your dad’s car when you were a kid – that stuffy, lack-of-fresh-air feeling that you could get rid of by opening the window…only this time i just had to tough it out and hope it would pass. Which it did. Then it came back again and again throughout the next couple of hours…. Very odd.

The dry weather recently had turned the usual horrific mud of Catton Park into a hard-as-concrete circuit that was covered in ruts and bumps and my rigid carbon fork was shaking me to pieces in certain sections of the course which wasn’t helping matters, each jarring bump and rut making my internal organs bang around inside whatever bag they’re supposed to be in and putting a haribo-sized blood blister on my hand (that admittedly has been good fun to play with for the last couple of days). I need no more convincing that tubeless is the way forward… 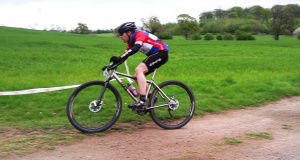 I carried on and despite feeling sick in the middle 2 hours and like I’d been beaten up in the latter part of the race I remained pretty consistent. I think I might have climbed one place from 8th to 6th at one point and thought that I had finished right there – in the ‘Curse of Twinklydave’ 6th place but in a weird twist of fate the results were fettled and I ended up in 7th instead. Positions 1 to 9 all finished with 12 laps, so quite a close run thing.

On reflection a good result. At the time though, my legs and my heart were ‘suggesting’ that I’d done much better than that. No matter – still a significant improvement on 2005 😉