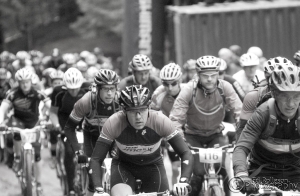 After a fairly steady ride up the first big climb in the Whinlatter Challenge (ok, a bit too fast as I didn’t realise how long this climb actually was) I was quite near the front of the pack but I started to have a bad day at the office as soon as I hit the first singletrack section. No mud or soft earth, no groomed, swoopy-ness – just spiky, jagged, unforgiving and extremely slippery wet rock. Traction and grip seemed to be something  that was completely in the hands of the gods as I did my best to remain the right way up on my fully-rigid bike whilst both tyres would slip and slide seemingly at random.

After every singletrack slip-fest I’d find myself back to the relative safety of a fireroad climb. Here I’d put some space in between me and the riders behind me that I felt had been holding up with all my out-of-control muppetry, only for my good work to be undone again as soon as more singletrack was encountered. Both wheels skittering around, no benefit of a suspension fork the front wheel would sometimes only offer a vague amount of steering control and eventually I lost the front wheel completely and tumbled down a hillside, leaving the bike and a few square centimetres of skin off my leg behind me.

From that point on, I was never too far away from a crash. One particular collector’s item of a stack involved me overshooting a berm completely on the thick gravel approach(!), I kind of fell off on purpose so as not to disappear down a hillside again, then watched as my bike was run over by another rider (an On-One sponsored rider, no less). He was very apologetic despite it not being his fault at all.

By now I was a bit beaten up and I’d tweaked my bad knee again. On the fun scale this was hardly registering…I was getting slower now, probably due to my self-preservation instincts kicking in.

And that was pretty much that. 2 laps of the Whinlatter trails, 32 miles, rather a lot of climbing and even more scary ‘this is going to hurt’ moments I finished 15th in my category and 19th overall, which in the scheme of things wasn’t that bad really.

At the end I chatted to a few friends about how full suspension is a good idea and even the tubeless debate cropped up again (yes, I really need to get my tubeless set up sorted so I can lose a few pounds of wind from my tyres). A cuppa, a butty, a change into roadie cycling clothes, Vitus road bike out of the car and Ragley mountain bike back in the car  and I was ready for the ride back to Manchester with Phil who had arrived after the start of the race.

After an hour or so of riding, a pretty major mechanical occurred near Windermere (Phil’s pedal fell off). We waited around for an hour or so while Phil’s wife drove back to meet us with a pedal and then we carried on.

Due to the delay and the by-now very thick fog, we adjusted our original plan of riding back via the hills around Settle, Gisburn, etc in the dark in favour of the more direct route down the A6. It would be nowhere near as interesting but at least we wouldn’t get lost 😉