The mud at this year’s Mountain Mayhem was beyond belief. Being dragged onto the camping field by a Land Rover on Friday afternoon, I was already imagining how horrific 24 hours of riding/walking around a ruined course was going to be – wheels not turning, huge, heavy lumps of wet earth stuck to every inch of lightweight racing bike…..urgh.

I didn’t fancy this. If anyone fancied a crack at the solo podium, they were bloody welcome to it. I’ve done races like this before and you’ve really got to want it to stand a chance of not sacking it off.

It continued to rain. We’d been here for 20 minutes and by now, everything was muddy. Even the caravan had been sprayed by the car wheels of an idiot. 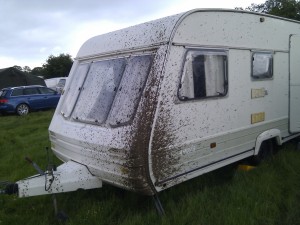 In the morning, I slipped and slid over to the sign-on tent. “Might as well get on with it” I thought. Yeah, really motivated to push myself right now, I don’t think. I went to pick up some cyclocross tyres from Brant at the On-One stand. Brant was having his breakfast so I sat down for a natter and a moan.

“I’ll give you this”, he pushed a large wad of tenners across the table “if you ride the On-One fat bike for the whole race”.

This immediately sounded like fun. I’d lose any chance I may have had of a podium finish, but I’d probably enjoy myself a lot more and I’d earn a few quid. Oh, and it’d be a good story to tell.

We shook hands and sealed the deal. I think Brant might have been surprised.

I was taken to meet my fat companion for the next 24 hours.

She was fat alright. Designed for expeditions in deserts and arctic tundra, the 4 inch tyres of a fat bike run at pressures around 6psi and as you can imagine, they’re pretty comfy but not the fastest thing on earth. A bit like sitting on an inflatable armchair. She was also a singlespeed. I amended my entry details in case I was in with a chance of a singlespeed category win or something (you know, in the event of all the other singlespeeders going back to bed).  I put my three race-prepped, gleaming, lightweight bikes back in the car and pulled on the lycra.

For some reason I lined up for the run near the front.

For some reason I gave it full beans in the run.

For some reason I rode the first lap as fast as I could and I think I was in about 5th place in the solo category. The bike was pretty hard work on the climbs (I was pushing/running up the big ones) but on the flat and going downhill it was hilariously good. Just leave the brakes alone and hold on.

I found myself steering with the rear tyre on purpose quite a bit, every time the back end started to slide on the surface of the mud I was able to just let it go until the bike was pointing in generally the right direction then I just started pedalling.

Luckily, I was also wearing fell running shoes (the bike had flat pedals) so I was able to run/march/trudge uphill in deep mud quite effectively. 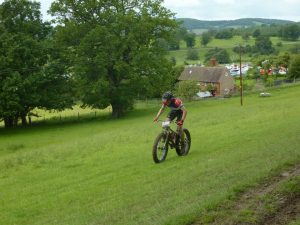 I was enjoying the ‘race’ when many others were justifiably getting a bit upset by it all. If I’d have been racing properly I’d not have been happy either. As the rain started to fall during the night, I stopped for a cup of tea at the Team JMC pit and attempted to stretch my back. I was in a bit of pain by now as the bike was pretty heavy and it was running a pretty tall gear. I rested for a while before setting out again after sunrise, by now the mud was in many places very, very wet and wasn’t sticky at all. As the sticky mud fell off the tyres the bike started to make sense, smashing through huge puddles of muddy water, creating huge waves that would get a wakeboarder excited , blasting across slippery roots and plummeting down hills as though they weren’t there at all. I was overtaking people! Nobody was calling me ‘insane’ any more 😉

Another cup of tea, another lap. 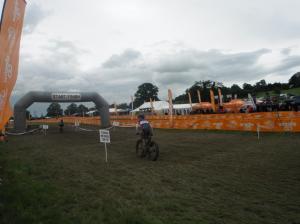 Rode a lap with Deb, who was taking part in her first bike race in the Team JMC ladies’ team. Tried to convince her that not all 24 hour races are this muddy.

Had a cup of tea and a pork pie.

Rode another lap. Mud was now really sticky again and the rear wheel stopped turning round. My bike became impossible to shift as I couldn’t lift it out of a rut because it weighed as much as a car.

Got to a rideable bit. Crushed everything in my path. Raced someone down a hill who was mocking my choice of bike. Annihilated him without any real effort J 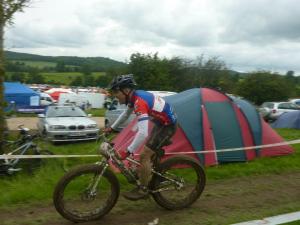 Finally got to the end of the race having ridden six long and at times, very slow laps but I’d loved every minute of it. Collected my dirty cash from Brant and rode across the line with it in my teeth. 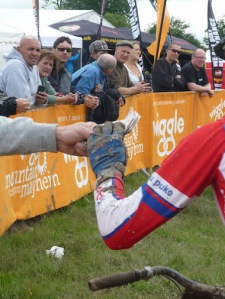 I’ve needed a ‘non-race’ for a while now. Hats off to the guys and girls that took Mayhem seriously this year – those conditions were at times as tough as I’ve ever seen them in a 24 hour race –  as far as I was concerned though, I’m chuffed to have had a great time just having fun when the weekend could quite easily have been all about “grinding out a respectable result”. I was a bit sad to hand the fat bike back at the end but hopefully we’ll meet again. 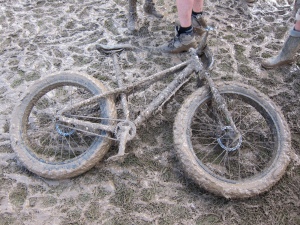 …While we’re on the subject of ‘taking it seriously’, the Team JMC vets team of Phil, Budge, Lee and Andy took 2nd place, the ladies’ team were 6th and Dave was 9th in the solo despite going to bed for a bit 😉

oh and despite not trying very hard at all I somehow managed to finish 4th singlespeeder. At least I would be if the results get sorted out 🙂