Another Sunday. Another 5am start. I’ve come to the conclusion that having a lie-in on a Sunday morning is a complete myth, or it’s something that only teenagers do.
I arrived in Barnoldswick early for the Ride With Brad Sportive to 1) Buy tickets for a ‘photo with Brad’ (for the kids mainly, honest) and 2) To meet up with Dave and get an early start to avoid congestion – it was going to be a busy ride with a rumoured 2000 people taking part. The photos with Brad idea was abandoned by the organisers, unfortunately. Something to do with Bradley wanting to ride his bike instead or something. 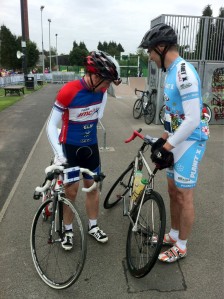 After a quick chat with Brant, Ali and Emma at the start line queue while listening to some strange questions Brad was being asked on the stage, I waited for Dave to arrive and get signed in. We set off a few groups and half an hour or so from the front. We did the usual ‘sportive thing’ from that point on really. Tapped along at a nice speed, joined the odd larger group here and there, had a chat, looked at scenery, watched as others ‘attacked’ on climbs, chatted a bit more….it was a nice day out. It wasn’t even raining yet.
The big difference this time though were the large crowds of people in every town and on the top of the bigger hills, cheering, waving and clapping. No doubt they were all waiting for Wiggo to make an appearance but for now, we were the warm-up act. The cheering was truly the best thing about the whole event; It’s amazing how much easier a climb can be when you’ve got a crowd of onlookers shouting encouragement and I’ll miss the noise and flag-waving for at least my next couple of training rides.
Caught up with Brant, Ali and Emma. Had the briefest of conversations and before long we were at the foot of the first timed climb. “Electronically-timed section, Dave. Prizes. Get on with it. Wait for me at the top.”. And he was off up the hill like a scalded cat. Eventually I arrived at the summit of the big hill where Dave was waiting patiently and we carried on – until the next timed climb and he was off again. I eventually arrived at the summit and we carried on.

That was pretty much it – big Lancashire hills, nice weather that eventually and somewhat inevitably turned to rain, a short stop at a feed station and eventually we arrived at the finish just over 6 hours and 101 miles after we set off in a satisfying 26th and 27th place. 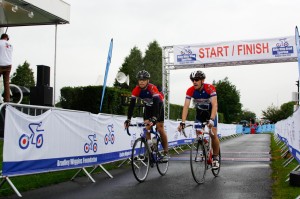 The cheering crowds at the finish line were huge, every rider being cheered as they crossed the line and each one of the spectators standing for hours in the rain to catch a glimpse of Bradley Wiggins who eventually rode across the finish line to rapturous applause.