I should have known, as I pulled on my favourite (and most expensive) pair of bibshorts and found that a couple of years of muddy endurance racing and hard training miles had worn a hole through them in a place that would have probably seen me arrested, that it was going to be one of those days.

I should have known, as we hurriedly pushed our eldest daughter out of the car on a lane near Austwick to be violently car sick on the grass verge, that it was going to be one of those days.

As it turned out, it was one of those days.

This year’s 3 Peaks Cyclocross didn’t look anything like last year’s. Apart from a bit of a breeze it wasn’t raining hard and it didn’t look like conditions were going to be anywhere near as epic. Shame, I loved that aspect of this race last year and for the first time I looked back and could honestly say “I really enjoyed that”. Nope, today it was sunny and everything pointed to a fast race in which everyone who was in the mood for it would get a personal best time.

The start was as crackers and as dangerous as ever and I watched, despite warnings just 10 minutes ago of the race being stopped for people riding on the wrong side of the road, a steady train of riders overtake the main group on the wrong side of the road. Normally I’d join them but figured I’d claw back dozens of places as soon as the road went uphill. I’m not sure I’ve seen quite so many people undertaking by riding on the pavement before though. Maybe that happens every year, but yesterday was the first time I’d noticed.

As the road went uphill I clawed back dozens of places and was soon pretty much back to the position I was in at the start. Me and Phil were soon climbing Simon Fell side by side and making good progress – our highish position in the field was getting better and we were almost guaranteed plenty of room on the ascent of the next peak. The ‘breeze’ was a fierce tailwind by now. I figured that if I got a little bit ahead on the climb I’d have a head start on the descent – Phil would almost inevitably pass me on the descent and we’d be able to help each other with the (mainly) headwind on the next road section that would take us to Whernside.

While spinning through the air, I somehow had enough time to think about various friends who’ve broken their collarbones and also my thoughts drifted to Dave’s Bolt. This was going to hurt. A split-second ago the descent was going well – Phil rode past but I was keeping up and the plan was up to now working. Where the plan went wrong was when I took the worst line imaginable into a steep bit – the bit of the steep bit with a bloody big, front-wheel-swallowing hole in it.

I think I was heading over to the right, but I somehow managed to twist my weight around and over-corrected things and headed over to the left instead. In mid-air I pitched forward and landed on my forehead. To be more accurate I landed on the front of my helmet which emitted a loud and expensive-sounding cracking noise and was driven into my forehead. I lay there for a few seconds, waiting for the pain of a broken something-or-other to kick in but thankfully it didn’t. My head was hurting and my lower back bore the full force of the saddle belting it so sitting down on the saddle for the remainder of the race was pretty uncomfortable but I appeared to have mostly got away with it.

The rider that was immediately behind me stopped to check I was ok and carried on. The rider after him fell foul of the same hole and also crashed, but I believe his was less spectacular than mine, so I win. The rider after him chastised us both as “that’s a bad place to stop, that, mate”. Cheers, thanks for that. That really lightened the mood. A bollocking for crashing in the wrong place.

My rear wheel had been torn from the bike in the crash (no idea how) but once I’d put everything back together and straightened the handlebars I took a deep breath, lamented on the 60 or so places I’d just lost, remounted and continued the descent.

I’d lost my concentration now and was finding it difficult to stay off the brakes and ride confidently, expecting more wheel-swallowing holes. I finally reached the sanctuary of the road and got on with the ride to Whernside. I knew I’d lost dozens of places now and that by the time I reached Whernside I’d be somewhere in the middle of the slow procession rather than the ‘brisk trot’ up the stone steps that I enjoyed last year. I mostly spent the road section on my own, my only constant companion was the wind.

The slow march up the steps of Whernside was pretty frustrating but by now I was resigned to the fact that I wasn’t going to catch Phil up and my ambition of finishing in less than 4 hours had pretty much evaporated. The main feature this year of the Wherside ascent was the incredibly strong crosswind that was at times making standing up difficult, never mind riding a bike. The 3 Peaks never fails to deliver something….

Unusually for me, my descent of Whernside was incident-free, but still pretty slow and “over-careful”. I reached the Ribblehead viaduct, got my usual round of applause for riding down the steps, collected a replacement bottle from Deb and carried on along the road towards the final peak of Pen Y Ghent.

I saw Phil start his descent of the gravelly track from the rocky bit near the top. That meant I was about 15 minutes behind. Maybe a bit more more. Perhaps I could still finish in less than 4 hours. Pressed on for the summit as much as you can in a procession of riders trying to avoid being hit by other riders running and/or riding down the same rocky trail. 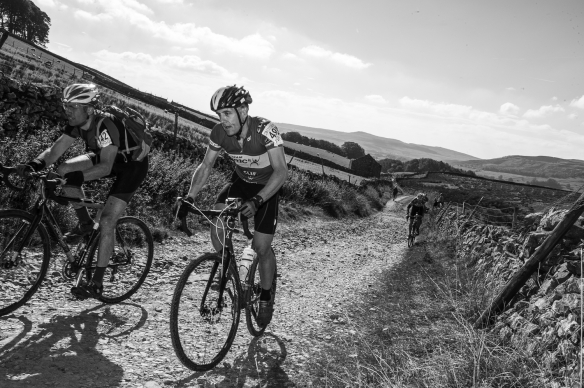 Started my final descent. I was telling myself for some reason that I still had enough time. I’ve cracked another helmet by crashing and landing on my head on this descent before and the pain in my lower back and by now the whiplash pain in my neck was reminding me of that incident. Again, the voices in my head were forcing me to take it easy but it was ok – I wasn’t going slowly as such, I was just being careful.

During the final, screaming blast along the rocky lane back to the road I got a puncture. Brilliant. I started to laugh. I had a chat with a couple of walkers as I fixed it, all sense of urgency had disappeared as quickly as the air gushed from my rear tyre.

Big thanks to 2Pure for the loan of the light (but quite obviously bombproof) Rolf Prima wheels, Deb for always being there when I needed her to be and to everyone else taking part or organising this great race that one day I’ll get to grips with…..