“Goin’ on up to the spirit in the sky (spirrritinthskiiieeee)….what’s where I wanna go when I die (whennIdieee)….”

Grr. I’ve always hated that bloody Doctor and the Medics thing. They were playing at an 80s music festival at the other end of Ashton Court estate while the Bristol Bikefest was on. I could hear The Doctor and his by-now-presumably-very-old medics belting out their one and only hit while I was trying to mend my snapped chain, halfway around a lap in the 12 hour pairs race.

Dave and I had been going well after a pretty slow first lap which followed my chaotic start in a melee of bodies and bicycles, which followed a Le-Mans-style run up a gravelly hill. We’d clawed our way back from 9th or something to 4th and were now on a charge, tapping out quick and consistent lap times with smooth handovers.

We dropped, like we’d landed in the wrong square in a game of snakes and ladders, right back to 8th due to the amount of time we lost while I made a pig’s ear of mending a broken chain.

No big deal, we’d crack on and climb right back again. Which we did. Within a handful of laps we were back to 4th again and were on our way to the podium places.

Next thing I know I’m stood at the changeover area, waiting for Dave…

5 minutes. Maybe he’s been caught in a load of traffic.

20 minutes…there he is. Dave breathlessly explains, as I’m turning around to run to my bike, that he’s had two punctures and has had to run over half of the 6 mile lap.

No big deal, we’d crack on and climb right back again. Which we did. 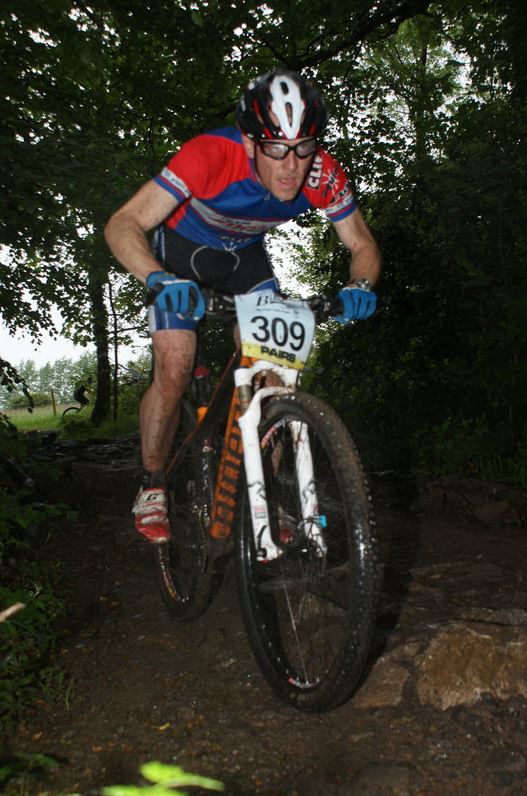 We were soon climbing back up the leaderboard, Phil doing a sterling job of giving us updates and treating our bikes with tickle of a jetwash and a loving, lubricated caress.

Back up to 4th. 15 minutes behind 3rd place and pulling back time on each lap. It was a tall order, we only had 3 or so hours of the race left.

We ran out of time and finished in 4th place.

Sometimes winning nothing can be satisfying too. A lot of guys would have decided earlier on that it just wasn’t their day, packed up and saved their legs for another battle but I’m proud that we showed what we’re made of, didn’t slow down and kept our chins up.

I can’t get that song out of my head though.

The Sunday had a more relaxed vibe, for me at least. I was supposed to be “racing” on a tandem with Guy, but something happened between the end of the TT and Saturday afternoon which meant that he couldn’t get to Bristol in time. No matter, Chipps bravely stepped up to the plate and rode the 6 hour race, on the front. Chipps knows how to ride a tandem so I was in safe hands (2 crashes notwithstanding). The TV cameraman filmed us anyway…. 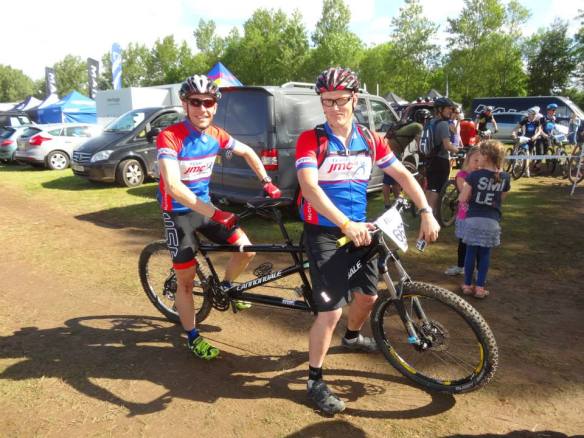 We rode carefully for a couple of laps, listened to Johnny Hates Jazz (I think) playing their set at the 80s festival and gradually got the hang of things. Apart from a couple of chainring-threatening rocks, we rode the lot. The Ashton Court course is VERY narrow and twisty in a lot of places so I’m nothing but impressed with Chipps’ skills as I sat at the back, leaning into turns as best I could. 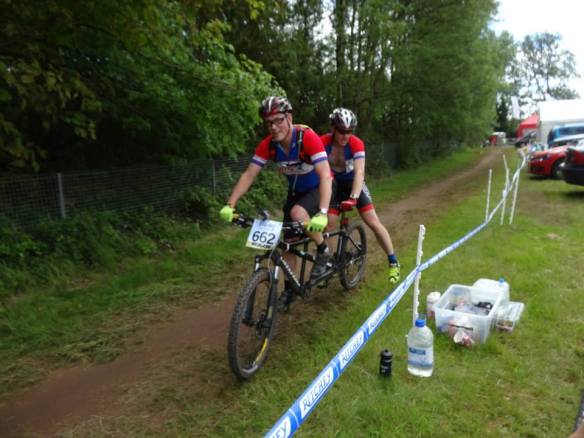 From the third lap (and the crucial second cup of tea stop) onwards, we were properly flowing and I was getting the hang of the pedalling. Our lap times were only a few minutes slower than my lap times in the Saturday 12 hour race where I had fresh legs and a carbon race bike (and I wasn’t stopping mid-lap for a cuppa) and our efforts earned us 2nd place on the podium! We were very chuffed as you can imagine 🙂 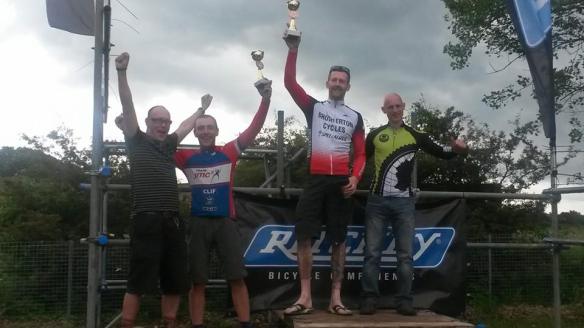 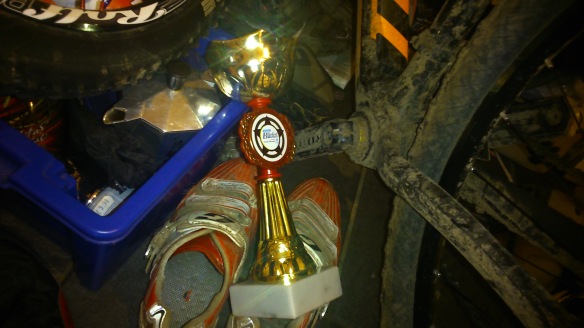