In spite of being in North Wales, the Ruthin MTB Marathon weekend is perhaps the nearest thing to a local endurance event residents of the North West of England have. It was such a noveltly in fact, that it wasn’t too much hassle dragging the caravan and my whole family over there for a fun weekend.

The format was a night time ‘marathon’ – the Exposure Lights Big Night Out. Not really a marathon at 25 miles, but a LOT of climbing and the first 25 mile ride for a long time that had me reaching for the compression tights when I got to the finish. It was also a rather eventful evening. More of that later.

The main event was Sunday’s civilised, 10am start, 75K ‘proper’ marathon ride. Not a race, but probably a race in the heads of many of those on the start line.

The sun had been shining, we were in the middle of an Indian summer – it was going to be great.

The night time event started with a couple of hundred people on the line (after Tom from Exposure Lights saved my bacon with a rear light loan – cheers!), including me and Phil and after a mad dash through Ruthin, the ‘event’ seemed to very much turn into a ‘race’ in the biggest cloud of dust I’ve ever experienced. Trying not to breathe in, Phil and I attempted to jump towards the front. Shortly afterwards we were hanging out in a small group of four, all hurtling towards the summit of the first long climb, all trying to prevent Ant White from disappearing into the distance.

We were doing ok. Well, the other guys were. I felt like I was going to have a heart attack.

Ant had a little gap but everyone was staying in touch. On reflection, I assume everyone felt the same and were going as fast as they could and it’s sometimes surprising how far you can push yourself when there are people around you all trying to hurt each other….but I was glad when the terrain levelled off a bit and I could get in the big ring for a bit.

We rode up and down for a while. As these things do. We were pulling a gap on the riders behind us and our average speed was staying high and on the unfriendly side of social….

A big, long downhill eventually arrived and I could pack my lungs back into my chest.  Phil, riding a bit faster on the descent than I was, momentarily disappeared from view. Then he reappeared…but he wasn’t moving. He’d found a patch of gravel, lost his front wheel and landed, shoulder-first, at about 25 mph. “I’ve broken it” he said. “naaah you can’t have done” was my glib reply. “carry on” Phil said. We were on a Welsh hillside, alone for the time being, in the dark and god-knows how far from the next marshal point, one of us with a suspected bone fracture. I was going nowhere.

Eventually the second pack of riders appeared and I asked 24 hour racing friend, Matt Jones, to tell the next marshal that we had a casualty. I also asked Nick Craig to do the same thing a minute or so later just in case Matt forgot 😉

Getting a bit cold by now, me and the Walking Wounded started to walk down the hill. Eventually Phil was bundled into the back of a Land Rover and was taken to hospital. At least that’s where they said they were taking him. I didn’t know for certain but I didn’t check. I’m not his dad 😉

So, off I went. Down from top 4 to somewhere-near-the-back but it was ok. At least I wasn’t broken. I got past a few riders and finished in 13th place.

But where was Phil? In Wrexham hospital until 3am, that’s where. I managed to get some sleep until the wounded soldier rang me and I went to pick him up, conciliatory bag of sandwiches and pork pie to cheer him up. 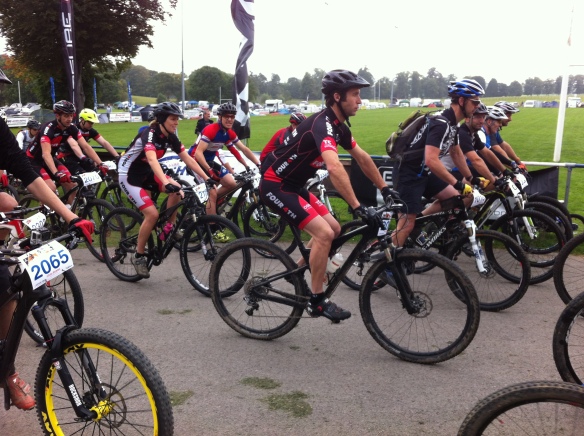 Sunday’s marathon was fairly quiet in comparison (thankfully!). I decided to ride it on the “bit heavier with loads of suspension travel and big tyres but it’s ok cos it’s mega” Singletrack long-term test bike. A few grand’s worth of rock-smashing, saddle-dropping awesomeness, 75K of hills and 3 hours sleep. The bike’s not bad at climbing, but no whippet. I rode with Matt for a while, thought a lot about Phil’s shoulder whenever I rode downhill, I even stopped at a feed station because they had those little jelly babies. I eventually rolled over the line in 9th position – never underestimate the value of caffeine gels, kids.

What I was left with were memories of a brilliant day out with some amazing hills and top-drawer organisation. After a few years away from the marathon series, I’ll be returning to do more of them next year.

I get through tons of protein – eggs, chicken, raw flesh (ok maybe not that) but after a ride I find that the best way to start the all-important recovery process is to get a protein shake down my neck.

I’ve ‘experienced’ most brands of protein shake that are available in the UK. I say ‘experienced’ as many of them are just that – not just a drink that might taste of chocolate or banana, but a whole rollercoaster of unpleasant shocks to the tastebuds and later on, shocks to my loved ones and work colleagues. Yep, I’m talking about farts. Anyone that’s serious about training and recovery would have encountered protein drinks at some stage and will be well aware of some of the unpleasant side effects that some brands can cause.

Some are worse than others. Some brands of protein shake produce more gas in a single day than the average farm animal could produce in a month. Some taste so horrible that you’re more likely to plough into the Rich Tea biscuits instead.

There are even protein drinks available that just don’t work very well. This might have something to do with the specific requirements of an individual’s body and loads of other factors such as how hard you’re training or even much sleep you’re getting, but I have used protein products that simply don’t seem to help you recover as well as others.

Admittedly, there are protein shakes that don’t taste horrid, seem to work really well and don’t cause cataclysmic farting and those are the brands that I use.

I’ve got a new favourite. Genuinely. It’s dead good. It’s called MyProtein Whey Protein Plus. My mate Matt reckons it’s good too and he rides his bike LOADS, so if we’re both saying it’s good stuff, it’s good stuff. Got it?

Admittedly I didn’t pay for this batch (honestly is the best policy) – I received it from ProBikeKit, but now that I’ve almost used it all I’ve ordered some more with my own money and.

The chocolate flavour tastes chocolatey. I don’t have any problems recovering from hard rides. It doesn’t make be flatulent (no more flatulent than normal anyway). You can get it other flavours and it’s not dead expensive. Try it and thank me later.