As many people know, I’ve been working on the next Hit the North race for the last few months. It’s only a few weeks away now and it’s nearly full. If you’re reading this and you want to be part of it, you need to sign up fast.

It’s going to be fantastic, like it always is. 2 hours of racing (or 2 hours of not racing if you prefer), trade stands including a Ragley demo fleet, awesome catering (with the legendary Viking Porridge), a rather large brass band and loads more. What’s not to like to 14 quid?

All the details, entry form, current entry list and other stuff here 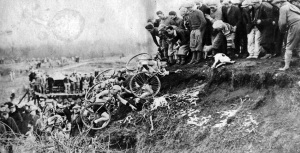 Note: after this blog post I promise that I will stop making references to my recent road accident. I expect everyone’s getting a bit bored of me droning on about it by now (I’m certainly bored of it). Anyway…

One of the positive side-effects of getting injured is that you can’t do anything but rest. Well, you can, but if you did you’d not get better very quickly, it hurts and you’d get told off by your wife/doctor/mum. The couple of weeks of rest, comprising a week of doing absolutely no physical activity at all and generally feeling sorry for myself followed by a week of more of that but with a couple of short, easy offroad rides has ended with me attempting a longer ride on the road bike.

I expected to have to cut this ride short to be honest. I thought that I would start to get horrifying flashbacks to the accident or the increased demand on my body would just be far too uncomfortable, but apart from a few nervous approaches to road junctions where cars were waiting to make their move, I felt utterly fantastic.

I even rode the same route that I was riding two weeks ago when I got bounced. I even stopped to take a photo at the scene.

Part of this feeling was because of the joy of being out on the bike again (once I was out of the urban chaos and in the hills that is). I literally felt lucky to be alive. The main source of my ‘fantastic’ feeling though was the obvious effect 2 weeks of putting my feet up has had on me physically. I felt easily as good as I did in the summer and I’ve realised just how short of a good rest I was. The worries about suddenly and inexplicably being slower than I was, the concern that I was in some way ‘losing it’ evaporated in a single 4 hours of riding a bike – the realisation that I’ve never really rested properly after any kind of trauma – be that a big race or a hard training week. Sure, I’ve got some work to do to regain some fitness but I’ve suddenly looked at how I’ve been training in the past and more importantly, how I’ve been NOT training.

Finally, thanks to a short-sighted motorist, I’ve been reminded how to rest.

I’ve been riding my bike again.

I was going to keep this quiet for a bit, just in case I had some kind of horrible setback and discovered that my legs are more damaged than I thought and then suffering the inevitable told-you-so’s, but it seems like my 11 days of doing absolutely nothing, resting, not leaving the house, missing the Strathpuffer (grrr) etc have paid off nicely. I’m not quite ‘there’, but I soon will be.

Apart from a bit of knee and shoulder pain, that will no doubt be some stubborn bruising and the fact that my ankle (the one with the chipped bone) is still rather swollen (ok, I’m still quite bashed in), I’m really pleased with my rate of recovery. After all, It wasn’t that long ago that I was lying on the road, holding my legs in agony with a smashed helmet, after which I was being told that I could expect ‘6 weeks’ of rest to recover.

Yesterday I rode to work and back. Felt ok-ish. Not too worried about a couple of aches and pains. So I went for a ride last night – it was a full moon and while I’m not a werewolf there’s something really special about riding bikes off-road, sometimes quite literally by the light of the moon. Last night wasn’t quite like that, it was really foggy, but it was still pretty cool.

I rode only for an hour or so but was able to climb ok, a couple of hard efforts were despatched without any stabbing pains anywhere. Ached a bit when I got home, but had some protein and put my feet up and rested my shoulder.

Rode to work again this morning, rode hard for a few minutes, I felt good.

I’m going to keep the short rides going for the rest of this week, keep them less than 3 hours,  and then pick up where I left off at the weekend.

The postman brought me some goodies today. The brilliant, clever and no doubt very attractive guys at Ragley have sent me a TD:1 frame – it’s like the prototype I’ve been racing on for a while, but a production one with even fancier-shaped tubes. I really can’t wait to get this built up. I’m going to use the red sticker kit on this one, as I’ve got some red parts lined up for it and besides, the other one’s blue 😉

I’m going to have to make sure I’m doubly awesome by the spring to get the most out of it.

To help with that, they’ve also sent me a new Cragg Vale ‘winter training’ frame – a lovely, light road frame (complete with a matching fork) that’s got clearance for slightly wider tyres and full-length mudguards. Just the ticket for clocking up hundreds of winter miles in the usual weather conditions…

A really neat feature are the stickers. They’re made from that Scotchlite material that you’d normally see in road signs and cones. At night they reflect light really brightly – and I’m doing a really big chunk of my training in the dark evenings or mornings so for me, this is a great idea. I’ve not had chance to put all the stickers on the frame yet, but there are enough to see how super-shiny they are at night…

Watch this space for more pics once I’ve built both bikes up.

I had the afternoon off on Friday to get one last big ride in before tapering for the Strathpuffer. I had one of my usual routes planned – ride from here through Oldham, Stalybridge, Hayfield, etc…climb as many hills as possible and keep the whole thing interesting by including sections of bridleway.

Heading down through Oldham on a main road towards Ashton I approach a junction where a car on either side waits to pull out. I make eye contact with both drivers, as usual. Or at least I thought I had. The driver on the right hasn’t seen me so just when I’m almost level with his car, he pulls out.

He’s intending to go straight across from the right into the minor road on the left so he accelerates. He drives into me, hitting the front of my bike and my right leg. I’m thrown onto the bonnet of the car on the left and from there I land on the road on my head.

Next thing I know I’m sat on the road next to this car, the driver gets out tell me to ‘stay down’ and starts to shout at the other guy (the idiot who has just caused the accident). Two women who have also witnessed what just happened run over to help and start to call an ambulance. I remove my helmet and it’s obvious that its done it’s job – it’s cracked in about 6 places, the outer shell is ripped to shreds by the impact on the tarmac. If I’d not been wearing it I’d have probably been dead.

The bike looked pretty bad- I can see the front wheel is the same shape as a Pringle and I know that the carbon fork will probably be damaged. Looks like the rear mech has been torn off too (the bike arrived home yesterday after Phil collected it and apart from the front wheel, fork and bars, it looks like its survived reasonably well).

All witnesses and the guy who hit me are still on the scene.

I’m sat in the road, worried about my legs. The pain is getting really bad now – I can feel a lump the size of a snooker ball on my left ankle and my right lower leg….well, it feels like it’s been hit by a moving car. Ambulance arrives, the paramedic tells me that he reckons I’ve broken my leg. I almost start crying. Actually, I think I started crying. I can’t stand up. I’m carried into the ambulance.

I call Deb and she meets me at the hospital.

Once at the hospital (which took a while as the ambulance driver got lost) I was put in a wheelchair and waited at A&E. I was given ‘priority status’ as I’d landed on my head and I was really impressed with how fast I got ‘seen to’. After some poking and prodding, some lights shone into my eyes and a few painkillers I was taken for X Rays. I’m still completely gutted that my leg could be broken. A broken leg would wipe out everything for a year…

A policeman arrives and asks me some questions about the incident, tells me that he will ‘be in touch’ with the driver and mentions that he’s a keen mountain biker and that he owns a Ragley hardtail. Small world.

A couple of hours pass until a consultant pops in and tells me that my ankle bone is chipped but apart from the fact that I’m badly bashed up, my leg isn’t broken. I almost cry again.

Eventually we arrive home and the reality of what happened earlier starts to sink in, so I pour a large brandy.

I’ve been told that recovery could take several weeks, so I’m going to rest and make sure that I’m back to normal and back on the bike as quickly as possible. Sadly this won’t be in time for the Strathpuffer this weekend….which I’m absolutely gutted about.