My mate Allen is a hard-working lad. So is his better half, Clare. Between them they manage to organise a brilliant series of road sportive events in the North West as well as running an equally-brilliant cycling-themed coffee shop.

(I think Clare’s got a full-time job as well so she’s probably the more hard-working of the two in fariness 😉 ).

The coffee shop serves nice coffee, cakes and massive sandwiches, has loads of space to park and lock your bike and shows pro cycling footage on a big telly. What’s not to like? Go there and get some of this down yer neck… 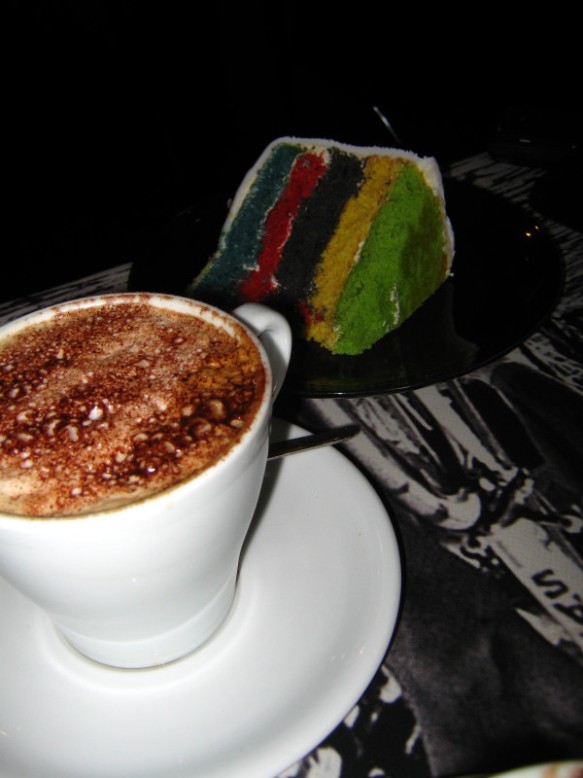 At the weekend I had a ride at Allen’s “Winter Sprinter” road sportive for the third consecutive year.

Say what you want about sportives, as long as they’re not completely populated by over-eager nutcases (who should really get themselves entered into a race to let off some steam) and as long as they’re not silly money to enter they’re a good way to ride a route that you otherwise wouldn’t normally do, get fed along the way and have a laugh. For someone that spends 95% of their riding time alone (and in the dark mostly), sportives make a very welcome and sanity-saving change.

They’re not a race and once you’ve accepted that they’re a bloody enjoyable day out.

After a brief ride to the start through the centre of Manchester I ate my large portion of porridge, said howdo’s to friends and off we went.

I’d decided, because I’ve been enjoying riding it so much lately, to do it on the Pompetamine. It’s only got the one gear and it’s also got flat bars and disc brakes so it’s a good job that sportives aren’t races but I was able to spin along nicely, enjoy the Cheshire lanes and had a good natter with a few riders that I’d only ever spoken to before via the magic that is Twitter 😉

It was going well….then 20 miles later my chain snapped. For some reason (my own forgetfulness), I only had 10-speed chain links with me and this chain is a 1/8” singlespeed-specific chunky bugger of a chain…so….I was pretty stuffed.

Off I marched in the direction of a main road that we’d crossed a mile or so ago. Rang Deb and grovelled for a rescue. Walked towards Knutsford and marvelled at the size of the mansions. A bloke in a very, very, very expensive car indeed offered to help. For some reason he didn’t have any 1/8” chain links with him in his half-a-million-quid motor.

It was good while it lasted though, honest!

At the end, everyone was treated to a huge portion of biryani and a slice of cake. I’d not earned mine so I hope someone had a double portion.

Get yourself entered into the next Polocini event – the appropriately named “B*stard” as there are a few more hills in that one than in our pleasant Cheshire excursion.