I’ve had mixed experiences with bikepacking luggage in the past. While the ability to carry enough sleeping kit, food and clothing for a night under the stars (or under thick cloud) brings a whole other dimension and level of scope to ‘epic’ bike rides,  sometimes the practicalities of strapping bags of stuff to a bicycle leave much to be desired.

One of the most common (and often most cost-effective) methods involved strapping a standard drybag to your handlebars. Inside you’d put your bivvy bag and if your drybag was big enough you’d be able to fit in a sleeping mat and perhaps a warm coat too. Some improvisation might be needed to stop the drybag bouncing around. You might need to be careful that you don’t snag your brake levers. If you’re really unlucky (like I was once) you might pull your brake hose out of the lever and have to ride home using your feet as a brake. You’ll definitely rub some of the paint off your frame and/or fork.

Similarly, you might use a harness-type of seatpack which allows you to bung clothing and maybe food in another bag and strap that to your seatpost. You’ll need to be careful how much you put in there and strap it up REALLY tight though; a swinging pendulum of woolly hats, spare underpants and pork pies high up on the bike adds a level of ‘interest’ to your offroad handling.

You’ll have fun though, bivvying is always fun if you’re that way inclined. 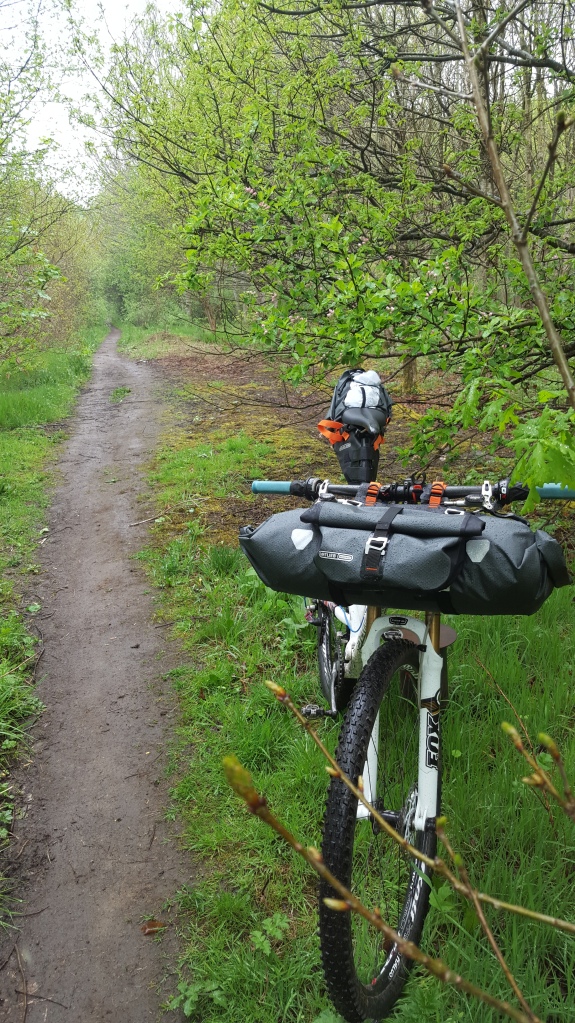 I kind of lived with all of these drawbacks and compromises until the first time I used the new Ortlieb seatpack, bar bag and accessory pack. None of the niggles I’ve mentioned above apply anymore – the Ortlieb bags are designed to be completely stable and secure in use, large enough to accommodate everything you might need, have an uncomplicated and unobtrusive attachment system. They’re also 100% waterproof, a characteristic of all Ortlieb products. 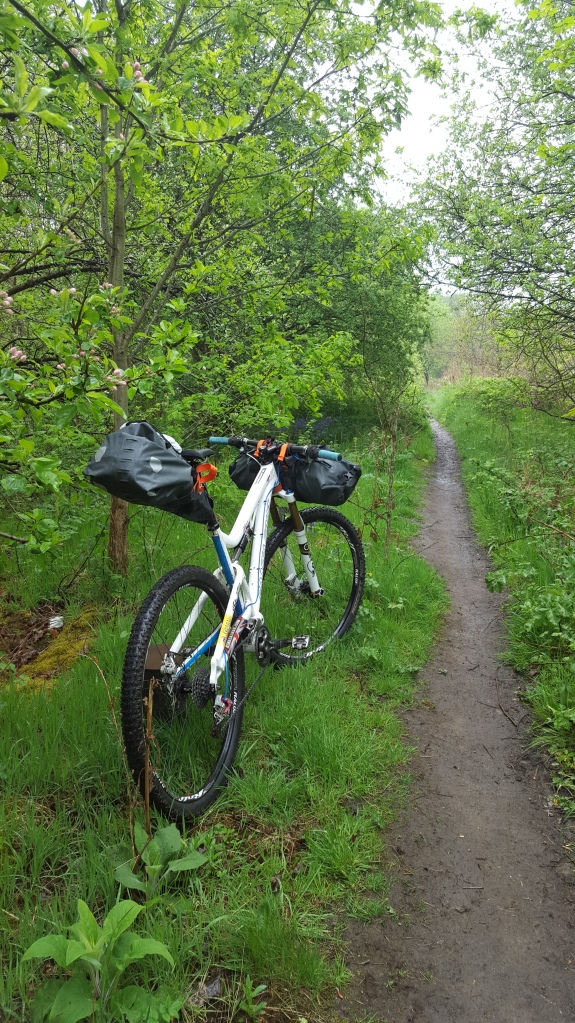 I can fit a rolled-up bivvy bag, sleeping bag and ¾ length self-inflating mat into the bar bag, along with a down jacket. Impressive. The pack isn’t small but the clever attachment  straps place the bag sort of underneath instead of in front of the bars, away from controls and lights so in this position the dimensions of the bag are hardly noticeable. Attachment takes a few seconds and there are plenty of thick pads to protect handlebars and paint. There’s a roll-top closure at each end of the bag which aids access and also makes putting a rolled-up bivvy bag bag inside a lot easier. 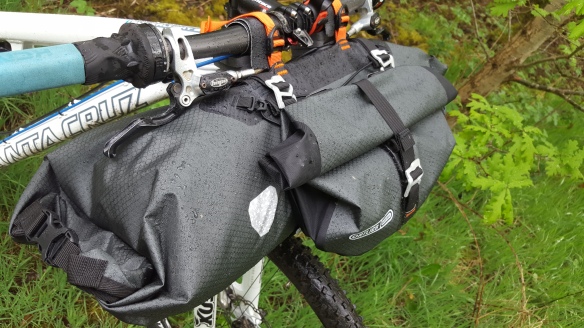 Stability is exceptional, even on very rocky terrain. A few kilogrammes of extra weight hanging from the handlebars is never going to be ‘invisible’ when it comes to bumpy terrain and cornering at speed, but there aren’t any surprises (such as the bag bouncing) and once your brain has adjusted to it, things are fine. 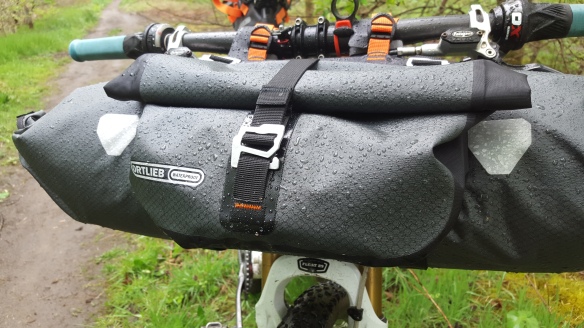 Attached to the front of the bar bag is the Accessory Pack. Large enough to fit a headtorch, a spare pair of gloves, a phone, some sandwiches and a map just where you want them, it’s also totally waterproof and it comes with an extra strap so you can use it as a bumbag if you like bumbags… 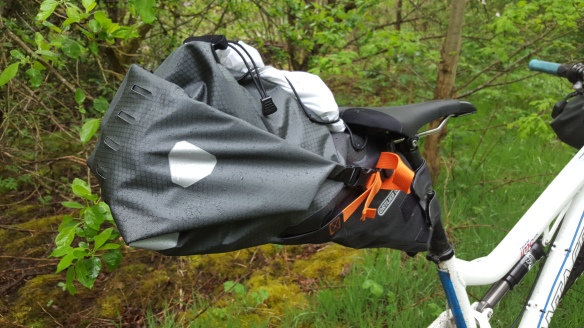 Under the saddle (and extending quite a long way backwards from the saddle) is the seatpack. This thing is massive – open it up and it looks like a feeding basking shark. You really can get a lot of stuff in there which can he handy for long multi-day expeditions or if you simply can’t leave the house without a dinner suit. Roll it up and close it and again it’s completely waterproof. Handy if it’s going to be sprayed with water from the back wheel for hours on end – it’s also big enough to provide almost complete water and mud protection for your bum/back. There are a couple of reflective patches and loops for lights as well, which is a nice touch.

There’s also an elasticated strap on the top of the bag for securing a jacket (or anything else you want to put there, really). 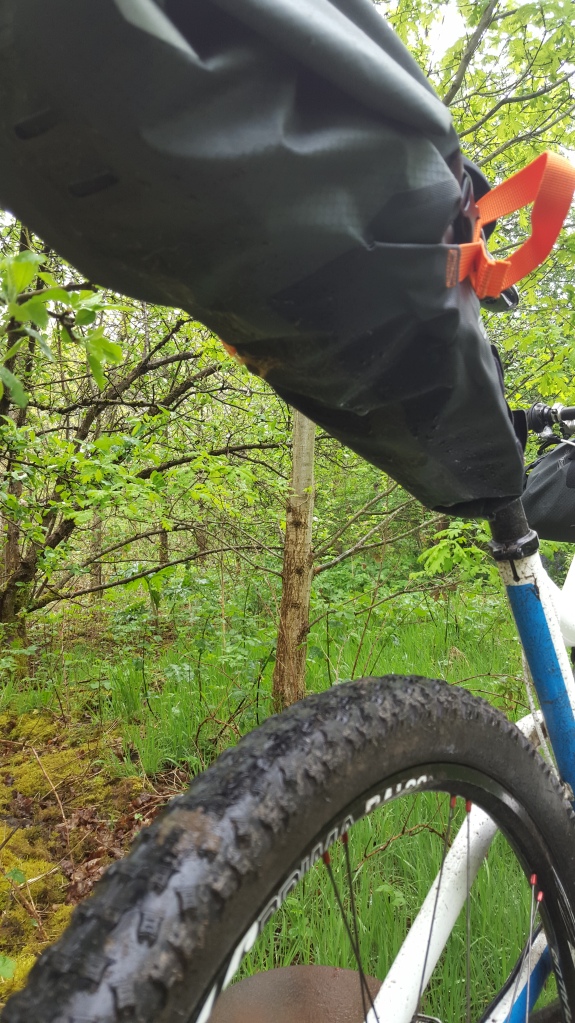 In spite of its capacity and potential size, the huge Velcro and webbing straps (which have locking buckles) that secure the bag to the saddle rails and seatpost do an admirable job of keeping swaying and weight shifts to a minimum. I also didn’t have to re-tension any straps at any point during a long offroad ride.

The standard of manufacture – the straps, closures, buckles and fabric – is probably the best you’re ever likely to see. You’re not going to wreck them in a hurry unless you’re exceptionally unlucky/clumsy. They come with a 5 year guarantee anyway.

Ortlieb have clearly only released these bags once they were certain that they were absolutely perfect – there’s no doubt that it’s a range of serious outdoors kit. There’s a frame pack scheduled for release next year – I expect that will be just as good.

I’m going to hammer these bags in a few local and not-so-local long-distance rides this year –  and I’ve already sold my old drybags and straps.