It had been months since I’d last been in a bike race. My withdrawal from the Strathpuffer last winter plus more running (mainly in preparation for the 3 Peaks fell race) during the last few months of 2015 and the first few of 2016 meant that I didn’t get up to any of the 2-wheeled winter ‘fun’ that I normally dabble in. I’d been riding my bike plenty in prep for the Rumble in the Jungle in Sri Lanka and the Euro 24 hour champs in Switzerland a week after that, but no cyclocross races or anything else competitive. My last bike race was the world champs back in October.

Something had to change, I couldn’t hide away for ever so I was really looking forward to turning myself inside out in the midweek XC race (round 1 of the Midweek Mountain Bike Madness series), just down the road in Leverhulme Park. Just enough time to finish work, get changed then ride to the start and spend an hour trying to stop my lungs from popping out of my earholes.

A few days of dry weather then some rain on the day of the race didn’t completely ruin the cracking little course – a nicely-varied lap of gravelly paths, fast singletrack and root-and-soil off-the-brakes steep descents. Karen and the team from Horwich Cycling Club had everything running like clockwork by the time I rolled up and signed in. 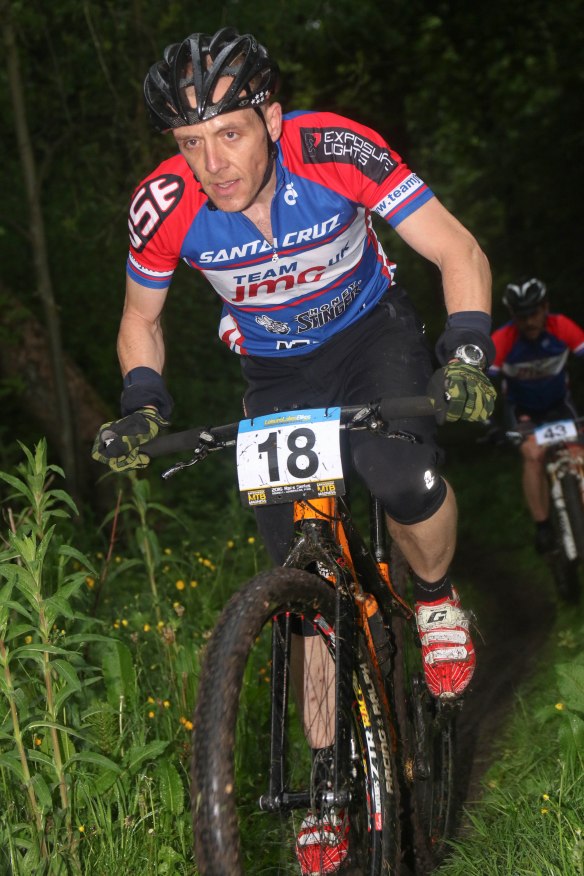 The first lap went better than I thought I would. I decided to ride the singlespeed which is probably a little bit under-geared but I was pleasantly surprised at how fast I could spin my legs round and hang on to the lead group for at least 10 minutes until I had to reduce my cadence before my legs actually snapped off.

The steep climbs weren’t very easy with just the one gear (and as it turned out, a rear tyre that was steadily losing pressure) – invariably other riders would be sensibly spinning up the incline while I ran out of momentum behind them, being far too polite to elbow people out of the way 😉

Anyway, it was a good laugh and I got a properly tough hour on the bike, followed by an easy spin back home through the woods. It was great to back in the swing of things.

Also back in the swing of things was Budge, taking part in his first race for god-knows-how-long following a serious injury. Good news.

The next few weeks are going to be quite hectic – at the weekend I’m flying to Sri Lanka for a stage race (I’ve never stage raced before, I’ve never been confronted by an angry elephant nor have I ever been to Asia), back at work for 4 days and then a drive down to Switzerland for the European 24 hour Solo Championship. Obviously I’m stressing about tyre choice for Sri Lanka and looking at the weather forecast I’m on the lookout for a waterproof jacket that is usable in 30 degrees centigrade….