it was a full moon last night. No wind, no cloud, “crispy” temperature. I just had to go for a quick ride after the kids were in bed. 10pm- The first few miles were great – fast, chilly and quiet. The moon was behind me most of the time and it was soooo bright that on occasion I was able to switch the halogens off, which was nice.

I stopped for a few pics on the hill overlooking the Irwell Valley. A particular favourite spot of mine is where you can see the city centre all lit up like a christmas tree. 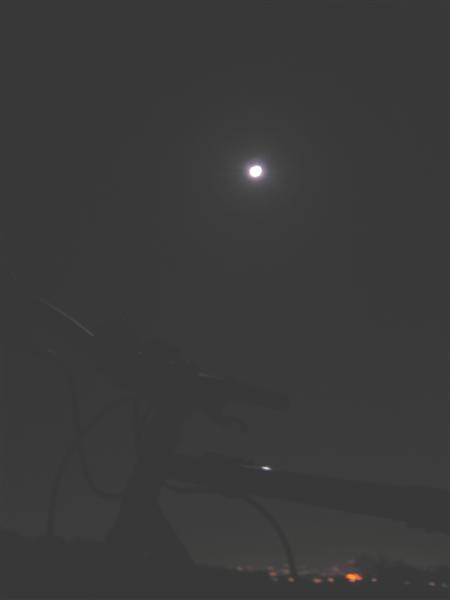 After a few mins, I started to get cold and thought it was about time I pressed on with the ride. Noticed I had a pucture. Bollocks. Got the spare tube out of the backpack. Wrong size valve – again. These On One rims have holes only big enough for Presta’s, and I had a big fat Schreader. So, get punctured tube and put some air in it and hopefully I can find the hole. There it is. Put a patch on it.  Now find the thorn in the tyre….there it is (ouch). Getting really really cold now, and I’ve got a small LED torch in my mouth. I’m dribbling over it like a mental.

I couldn’t get the thorn out. It was a big one, but it had gone through one of the centre knobs of the tyre and it was stuck fast. Ten minutes with the mini pliers and the Swiss army knife and I’ve got an interesting section of tread pattern and “most” of the thorn removed. Sod it, the tube’s going back in. By this time I was colder than I’d been for a long time and I was cursing my lack of a jacket and the LED torch that was now trying to extract my teeth.

Tube in, then on with the C02 inflator. Now, you’d think this was flash until I tell you that I could’ve farted more pressure into the tube. What a sack of shite. Anyway, good job I’ve got a pump too.

Back wheel back in, then I drop the bolt from the end of the QR skewer in the grass. AAARRRGGH! Ten bloody freezing cold minutes I then spend on my hands and knees looking for it. There it is. Grrr. Bastard.

All done. everything back in the bag. Gloves on. Turn the bike over. SMACK. I belted the handlebar against my shin.

So that was worth doing. Got back at almost midnight.