About an hour after finishing work on Friday, the van was packed up with two bikes and race kit, I was waving goodbye to the kids and I was on my way to Fort William (via Preston to collect Dave and Wayne), over 300 miles north of my front door, for 10 Under the Ben – a ‘short’ endurance race at ‘only’ 10 hours.

The race was starting at 9am the following morning, so if we were to stand a chance of getting a half-decent night’s sleep we needed to get a move on. We arrived in Fort William at about midnight and within half an hour we were all tucked up in our tents (thank god for pop-up tents!), ready for the early morning pre-race faff. So far so good. 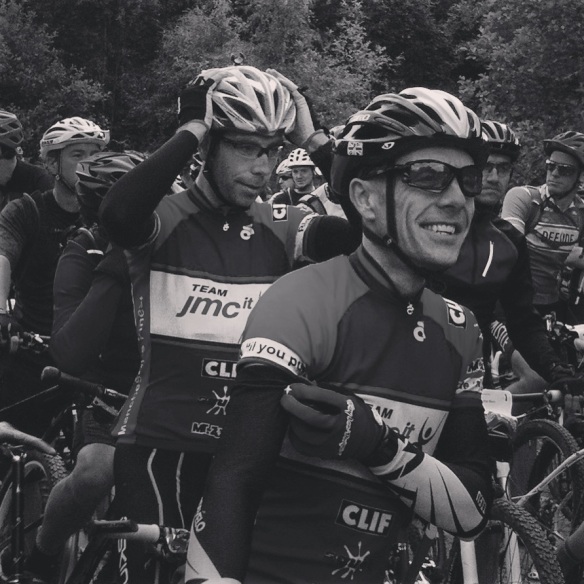 The race started. Four-time winner of 10 Under the Ben, Greig Brown, raced off towards the horizon. I settled into my usual pace which tends to be fine for races lasting 14 hours longer than the one I’d just started. I started to go a bit faster, but not much faster. The course, compared to the type of stuff I’ve been racing on recently, was very tough. Not too many big climbs (although it was far from flat) but plenty of technical bits and fast stretches that kept things interesting/fun/dangerous.

About five hours later, Wayne (who spent the whole 10 hours handing bottles and jelly babies to me and Dave) told me I was 1st in my category so I assumed this also meant I was doing ok in the overall solo standings.

Five hours after that, I finished my 11th and final lap, finally caught up with Greig (who had continued to race towards the horizon at full pelt and took the win again).

I then had a cuppa, stood on the podium as 1st vet and 2nd overall, packed up the van, ate some chips and gravy and then drove home, arriving home 34 hours after I’d set off.

(Then I did the ironing.)