This time of the year is probably a good time to have a look at some of the stuff that lovely folk have sent to me to be hammer…..I mean, “tested”.  I’m quite lucky in that there’s quite a lot of things that I’ve been sent this year so rather than bung all my thoughts into a single post I’ll drag it out over two or three weeks… 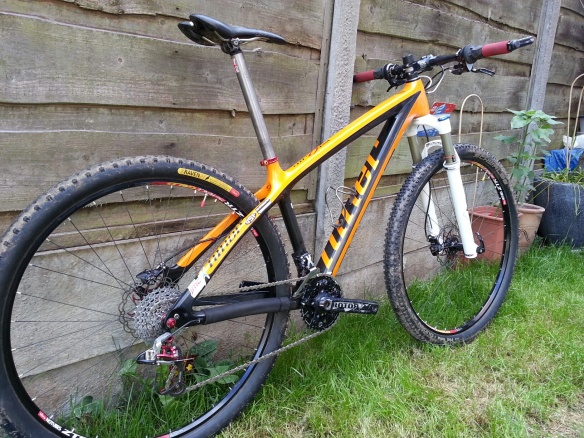 I started the year without a bike sponsor but in between my mate Matt and a sympathetic pair of ears at Jungle Products, I’ve been racing on a gorgeous Niner Air 9 Carbon for the past few weeks. To be fair, I’ve not raced on it quite as much as I’d planned as my Mountain Mayhem adventure lasted only 5 laps but I did rag it around the Fort William XC course for 10 hours and rode to the podium at 10 Under the Ben. It’s rock-solid. And crazy light – I’ve built this one without resorting to anything too minimalist and it’s a shade under 20Ibs. And has looks to die for.

I’m not brilliant at reviewing bikes but in essence this is nice and long, has masses of standover (if that’s important) and seems nice and comfy. My bad back hasn’t had an issue with it anyway. The geometry seems bob-on with a 120mm SID fork up front – the steering is nice and sharp but it’s not too sharp that you can’t ride no-handed while overtaking people 😉

The internal cable routing might have you swearing a fair bit but once it’s done, I guess it stays done.

Just how good this bike is will be exposed in a couple of weeks’ time when I ride it for 24 hours straight at TwentyFour12.

My old compression tights didn’t work because they were full of holes. They’re also horrendously warm when worn in bed. These Nike Pro Combat Hypercool ones do the same thing as all the others – they give your muscles a squeeze, this increases blood flow and you wake up with a spring in your step instead of a groan after a hard ride the day before – however these seem to be thinner than the others that I’ve tried which means I can wear them without getting too hot. Spot on!

I must admit I was a bit concerned about the number of spokes in these wheels. There aren’t many at all – 24 per wheel – and I assumed that not-many-spokes means ‘weak and flexy wheel’. Just like Rolf wheels from years ago, the spokes are ‘paired’ rather than evenly spaced and they reckon this is how they can get away with using so few of them.

I don’t know much about the physics involved but I can tell you that I’ve properly belted these wheels around races (including 26 laps of the component-death of the Strathpuffer) and all over the moors and packhorse trails for the past 6 months or so and they’re still straight. The bearings haven’t gone yet either. They use a Stans rim, complete with tape and valve so fitting tubeless tyres with some sealant and some Hardcore Pumpin’ Action with the trackpump is a (relative) breeze.

I’ve been pleasantly surprised by these wheels.

Next week I’ll drone on about fingerless gloves, chain lube and lights.