I’d been looking forward to TwentyFour12 ever since I entered it several months ago. In spite of having never ridden at Newnham Park before (it’s a bloody long way from Manchester), I knew for certain it was going to be a rewarding and fun course to ride because so many people have told me that it is.  Arriving early (for me) and in daylight, I treated myself to a practice lap a whole day before the start of the race. I think the last time I managed to ride a practice lap was at a certain race in Italy last year….

The course didn’t disappoint. After a long one-and-a-bit-kilometre climb, the fun kicked in good and proper and lasted pretty much throughout the lap. A fabulous and sometimes-tricky mixture of woodland singletrack, water crossings, rock and root-strewn swoopy bits, bombholes and plenty of high-speed sections through the middle of the campsite and various pit areas, losing interest and motivation due to the course being dull just wasn’t going to be a problem.

I’d showed up with three of the ace-est and raciest bikes I’ve ever shown up at a race with. As well as perhaps the greatest and shiniest-ever third “emergency” bike ever – my ever-trusty Ragley TD:1 – I was planning to Lay Down The Hurt™ and Royally Kick Ass™ with the Niner Air9 and the newly-built-just-yesterday Santa Cruz Highball Carbon. The Niner was to be the ‘main’ bike with the Highball there as a spare bike but would hopefully only be used for the occasional lap while the Niner was being cleaned or lubed or if I fancied a change of riding position.

The race started (without a Le Mans-style run! Hurrah!) and the strategy worked – the Niner is the more stretched out and racy of the two bikes and with slightly lighter wheels it felt the quickest to the top of the main climb. The Highball on the other hand definitely felt like the more ‘playful’ of the two, presumably due to the shorter top tube and (in this case) the more powerful brakes than the ones I normally use.

Anyway, subtle differences aside, me and my two awesome two wheeled friends were tearing up the course and swapping between the two wasn’t making any difference in lap times. I knew that there were a few guys in the race that would be well up for this and more than capable of the win therefore stamping some authority on the race early on was going to be very important.

For once the plan worked and a gap between me and second place immediately appeared. Inside 8 hours I’d lapped the entire solo field so I treated myself to a cup of tea. A few hours later it got dark and the course kept me focussing on the job in hand…. 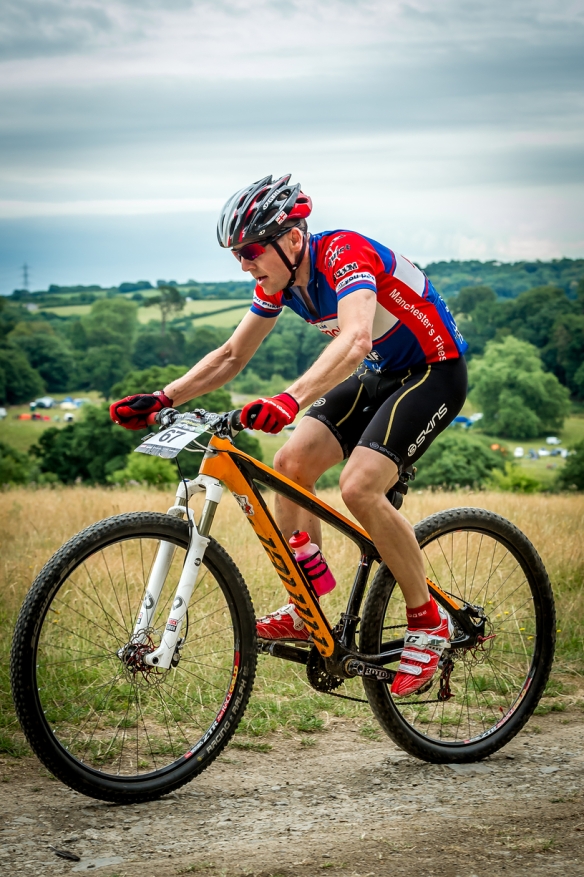 Race rivals battled between themselves for the remaining podium places while the messages from my pit were consistently “big gap Jase and still pulling”. Lap 3, 5 minutes…lap 7, 20 minutes… lap 10, one lap and 10 minutes….

What was surprising me the most was how comfortable I was feeling. I’d gambled a little bit on quick lap times and big efforts early in the race but thankfully my body wasn’t complaining. Only when the end of the race started to draw near did things start to become painful but even then, the brilliant course just kept the motivation levels high and I didn’t really hit the same depths of despair that I normally do in the wee small hours. I just wanted to maintain or extend my lead so I could grab a sit down and a bacon butty before the finish of the race 😉

Sometime the next morning I was a couple of laps up on everyone else so had another cuppa and started to think about how many more laps I needed before I couldn’t be caught. Obviously I needed some help with the maths from my rather-large and exhausted pit crew (Deb, Rachael, Lee, Mick and Kerry – love ya) and to be honest I think they were just plucking figures out of the air when I was told I needed to do “four more laps”. Four???! I thought I was going to have to do three…perhaps even two. Oh well, I moaned and got grumpy for a few seconds and set about riding four more laps.

I’m not sure if I did ride four more laps or three more laps but I rode some laps and then had a sit down in a comfy chair with over half an hour of the race to go and ate some sandwiches. All I had to do then was roll across the line after noon, arms aloft, first place. Winner winner chicken dinner. Get in!-

Thanks to everyone who helped keep me and the bikes going, whose who shouted encouragement (some without fail EVERY lap – that’s you Brotherton Cycles’ Dan and Verity), the amazing guys at Jungle for two of the most amazing mountain bikes I’ve ever ridden, Team JMC for the support and big gazebo, Mount Zoom for the stuff that makes light bikes even lighter, 2Pure for the brilliant Rolf Prima wheels, Clif Bars and Chamois Butt’r, Exposure Lights for turning night into day (and for the podium prize) and Teko socks for the socks that kept my feet comfortable in spite of repeated soakings in those pesky water crossings (two per lap…33 laps….) and to Martyn and his team for organising a brilliant race on one of the best courses I’ve ridden in God-knows how many years of endurance racing.