“There aren’t many people with the opportunity to do things like this” I kept saying to myself, trying to reinforce the fact that I am, in essence, a Very Lucky Lad to be able to travel overseas to ride my bike. It wasn’t making the experience any less painful.

I think the entire world knows by now that I had a stupid crash on my bike a couple of weeks ago that left me with nettle stings all over my arse and a cracked rib. I’d like to say I don’t moan about such things very much but honestly, I’ve droned on and on and on about it. There’s nothing worse than the guy that highlights his apparent handicap (hard training week, hard work week, broken bone, cold, wrong tyres, I’ve just won a baby in a raffle and it kept me awake, I accidentally brought a singlespeed/fatbike/unicycle, etcetera…) to everyone before every single race but for the past couple of weeks I’ve (admittedly self-consciously) been That Guy. Sorry everyone BUT IT REALLY HUURRRRRTS.

Debbie even offered me a number of Get Out Of Jail cards in the week leading up to the big trip to Belgium for a stage race. It’s always easier if someone else decides to drop out of a race for you. I declined the escape route though, like I said – “There aren’t many people with the opportunity to do things like this”. Besides, we were meeting Lee and Rachael there and even if the race was a disaster we’d be guaranteed a weekend-long bloody good laugh with our friends.

So off we went. A 600 mile drive south to Belgium. Lovely, pan-flat Belgium. Home of waffles, fine beer, chips swimming in mayonnaise and other stereotypes.

Actually parts of Belgium are full of wartime history, steep (STEEP!) valleys and people who don’t speak any Flemish, nor do they seem to sell waffles.

Not flat though. Very, very, very not flat. Not mountainous but trails like a dragon’s back. Up and down and up and down all day long. The first 80-something kilometre long stage was a killer with one 20 percent climb after another and  by the end I was in a fair bit of discomfort – the rib injury-induced shallow breathing of the previous week had returned and even though I only brought it as a precaution, the co-codamol came out that evening so that I’d get some sleep.

The second stage was longer and while I’d have loved it to have had climbs that were less steep, I was to be disappointed on that score. It was 100 kilometres of up and down and up and down all day long. That one took me ages and ages to finish. Longer than everyone else I knew, in fact.

I had a long lie down and dreamt of the easier final stage. 77 kilometres of smooth, flat trails with an ice cream van situated every 5k.

That was a dream, obviously. This last stage, despite being shorter, was in reality even harder than the previous two horrors. Sat at the start line, having a jolly chat with Lee before he disappeared up the first climb, I felt like I’d been in a pub fight every day rather than a bike race. One of those fights where your opponent is a sneaky bastard and concentrates his punches and kicks on your obvious weak spot. I was in a codeine-induced daze too. I was having so much fun!

“There aren’t many people with the opportunity to do things like this”.

20K from the finish of the third and final stage, I punctured my rear tyre, couldn’t get the tyre back on the rim with a tube in it (this had happened to me before), snapped three tyre levers. One of them didn’t even belong to me. Started to walk to the nearest road with my bike on my shoulder. Not what the bone doctor ordered.

Watched the time cut-off approach and then elapse as I tried to describe to Debbie where I was. “I’m on a road near a village….erm…somewhere”. She didn’t know where she was either, but eventually we ended up in the same place. 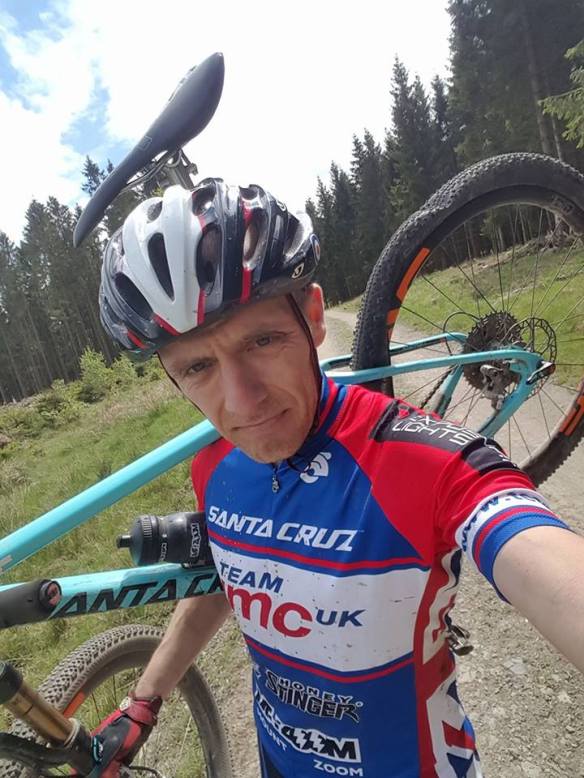 Bike in the car and the Drive Of Shame back to the hotel. Even though I was keen to tell a race official that I’d retired from the race, she didn’t seem that interested. “What would you like me to do with this information?” she said. “Errrr well why don’t you send a helicopter out to look for me or something?” , I replied, expecting a kick from Deb for being a grumpy git.

“ahh yes. What is your number?”. She got the message in the end.

I just wasn’t in the mood.

A few hours of eating pizza and drinking red wine was needed. So that’s what we did!

The Belgian Mountain Bike Challenge is a 3 day mountain bike stage race in the Ardennes region of Belgium. It’s very, very hard. There are around 600 participants and nobody is a messer. It sells out in a really short period of time and while I would recommend you took part, you’re probably better off turning up well-rested and injury-free.

See? I do these things so you don’t have to.