We’ve just got back from a weekend in Disneyland, Paris. If I’m honest, I was a bit cynical before we went but after spending a few days there my attitude’s changed. Ok, it’s really expensive and you do get annoyed from time to time after the 10th hour of queuing and being shoved around by ignorant French folk, but the kids absolutely loved it. Rachael’s only 8 months and she just smiled and laughed all weekend.

Michael broke his rollercoaster duck a few times over.

I got some great photos and went on Space Mountain a few times.

The hotel was nice.

BUT. The fabled “Gallic Shrug” tends to wear thin after a bit. Whatever you’re complaining about (and there was a few things to moan about. “Room for improvement” you could say), this bloody irritating expression seems to be the only response you’re ever likely to get from one of the locals. Grrr.

Debbie got food poisoning on our last day there, which sucked big time.

Anyway, here’s up close and personal with Tigger: 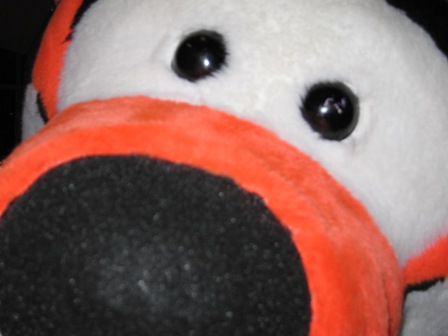