I’m in a group of about 15 riders, hurtling along a flat road, chasing the leading pack who are also hurtling along at a hell of a rate towards the first climb (and offroad section) of the race. This is quite unusual. First of all, we are all riding mountain bikes, even though up until now this has very much felt like a road race. We’ve been riding for 12 miles with another mile to go and we’ve not yet ridden on any dirt. My Garmin says that my average speed is 23mph. Our group is desperately trying to keep the leading pack as close as possible, but they’re definitely pulling away. We’re all taking our turn on the front and luckily we all seem to be comfortable with riding in close formation and general road riding ‘etiquette’. For that authentic roadie effect, nobody is talking or communicating either, save for the occasional helpful hand gestures to indicate parked cars, potholes and emerging farts (perhaps).

The Isle of Man End to End is a very unusual event. Well, for the first 13 miles or so anyway.

The effect that this elongated ‘warm up’ on the road has on my overall position in the 1062 people that started is a long-lasting one. The lead group of perhaps 30-odd (fairly fast) riders are mostly too far ahead to be caught in the remaining 27 miles of offroad – while any attempt to catch the lead group whilst on the road results in being swallowed up and dumped to the back of the chasing pack so we are all content to keep motoring along like this and wait until the hills sort the men from the boys – whilst I wasn’t going to catch too many people I thought that if I could at least avoid being overtaken I’d finish in a ‘respectable’ time in a similar position to the one I was in at this stage….

The first climb was a bit of a brute. Starting on a narrow tarmac road and eventually following a broken rocky track to the top of the hill, the gradient seems to get ever steeper until many are off and pushing to the first of many false summits. At last I’m able to catch and pass a few other riders who have maybe overdone it at the start…

Once at the real summit, the trail winds down the hillside on a very rocky track that was brilliant fun but was so rocky I can’t say I had chance to look at the scenery much. Despite the rigid fork on the Ragley 29er I was keeping up with the bloke in front who was riding a Yeti full suspension thing anyway. Perhaps I was going to little bit too fast though as a rock flew up off my front wheel and belted my shin. I squealed like a girly. It was a big rock though.

Apart from chucking rocks at my legs the bike was great – I’m running my front 2.4” tyre at quite a low pressure so despite the rocky ride I was comfortable plus I was having no big problems with maintaining control or traction. It was also proving very handy to be able to just stand up and climb out of the saddle without the fork bobbing up and down.

More climbing followed, as did more downhills though forests, open moorland and muddy rutted fields. One climb in particular sticks in my mind for being an utter swine – steep, narrow, rutted and rocky. A real leg-burner and a delicate balancing act between smooth pedalling and maintaining traction (loads of standing up until the back wheel starts to slip then sitting back down again quick, in other words). 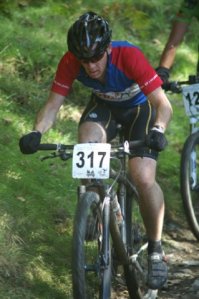 The final descent towards Port Erin in the south of the island (and where we were staying) through a series of fields was followed by a shortish road section with a big CLIMB to the finish line. How nice.

I finished in 3:18 in 27th place. Pleased to have beaten my 3.5 hours target but a bit frustrated that I couldn’t move even further up the final placings. Next year I’ll hang onto that lead group somehow 😉