After the disappointing performance of the Schwalbe ice tyres (that were sent back for being crap), I was hoping that the Continental Nordic Spike tyres would be much better, or at least not fall apart, roll off the rim or be so bent that it actually afffected the handling of the bike. I’m happy to say that they’re great. 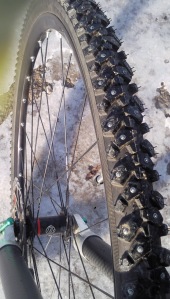 A bit wider, a bit knobblier (and therefore better in loose/muddy conditions), plenty of metal studs so that I can steer and even brake on ice and basically much better made than the Schwalbes.

Testing them this afternoon involved riding as much scary ice as possible including one or two downhills where the tyres didn’t break away but they were pretty scary bits all the same. Inside I was screaming.

I didn’t really set any goals as such at the start of 2009 apart from better placings in a couple of key races and a more disciplined approach to training. I achieved both of these – 2nd place at CLIC, 5th at Mayhem and a 3rd place at Sleepless in the Saddle were all way better than I was expecting plus my approach to preparing for these races, whilst not perfect, was a big improvement over the previous year. If I can continue to improve in 2010 I’ll be very happy indeed – the plans for the year are taking shape already with the imminent Strathpuffer, the UK 24 Hour Solo Championship, the Kielder 100, Mountain Mayhem again, the 3 Peaks and hopefully another trip to Dusk Til Dawn as a solo competitor.

I’d not set a mileage target or 2009 as I’d never logged mileage before so I didn’t know what was realistic, nor do I think it’s that relevant anyway (quality not quantity innit).  2009’s cyling mileage ended up at 5338, which isn’t bad for a full-time employed married father of three who does most of his cycling in the dark – if I can ride more than that in 2010 then that would be nice but I’m reluctant to put loads of emphasis on it.

Other cycling highlights of 2009 are the support from Brant and Ragley – I’m really fortunate to have this kind of support that gives me the opportunity to ride some great bikes and also to help in a small way with the development of future production bikes. The Team Ragley Daft Rides have been utterly ace too – Me and Dave have been exploring the boundaries of what’s possible in a day’s riding and as it turns out, it’s rather a lot. The Pennine Bridleway and the MTL in a day, the frankly terrifying Cumbrian/Dales monster route and the Pendle cyclocross ride were all enormous rides that whilst were brilliant training for 24 hour races, we only really do them because they’re such an enjoyable challenge. The Daft Ride awesomeness level goes up to 11 in 2010 😉

We’re going to have another great Hit the North sprint race in February followed by another big endurance race in the summer. The ‘Sprinter’ race last February was a great success and whilst it was much smaller than the 12 hour race of the previous summer, those taking part seemed to enjoy it a lot more. Maybe the weather played a part….

As daft rides go, this one was right up there with the daftest of them. Postponed from a clear, windless night some weeks ago we were now attempting a big offroad route  on a windy and snowy night – basically meet at 9pm and ride all night, aiming to get home at 9am. To meet at 9pm Dave would have to ride from Preston, making my 45 minute spin to Peel Tower seem very tame indeed. Phil was also riding tonight – he lives 5 minutes from the tower. The basic route was join the MTL, ride that to Calderdale, ride a big loop over there then return via the MTL then the 3 Towers route as far west as possible in the time allowed before returning home.

After the usual pleasantries we set off towards Rawtenstall on the road, eventually joining the MTL at Lumb and started to gain some altitude. As we travelled further eastwards the snow got heavier and we all got wetter. We were also getting slower due to the poor conditions. Eventually we reached a road and decided to ride down it towards Hebden Bridge – by now the wind was gusting ferociously, the road was rapidly disappearing and we were having to bow our heads to one side to stop the broadside of sleet and snow from hitting us in the face…it was obvious we were going to have to abandon this ride; we were all soaked, we were cold and spirits were getting low.

Once back to Hebden we headed along the road back towards Rochdale, Phil headed back to Ramsbotttom and Dave and I rode to my house where we threw his bike in my car and I drove him home to Preston – by now it was after 2am.