Deep down, I knew I’d made a big mistake. I didn’t dare tell anyone at first, fearing that I’d be ridiculed. But I knew they were upset. I’d first been told what to do on a school trip many, many years ago and I’d been reminded by locals on every trip to this island since.

But this time, I forgot to wave or say hello at the fairies at the Fairy Bridge on the Isle of Man. If you’re not familiar with the Manx superstition, you can read about it here, and I urge you to take heed. If you’re in anyway unconvinced, then this tale of woe will surely change your mind….

I was staying with friends in Port Erin, 15 or so miles from the start of the Manx100 race in Douglas. My plan was to arrive on Saturday afternoon, have my tea, go to bed and then ride to the start in the morning.

From the description of the route, it was clear that this was going to be no easy task – just over 100 offroad miles and somewhere around 16,000 feet of climbing awaited – so I made certain that I got to bed on time before a 4am start, some half-asleep shovelling of breakfast cereal and an easy ride to Douglas. On the way, I pretty much ignored the fairies until it was too late.

The start of the race was ok. I found myself in the leading group and while we were moving at a good pace it wasn’t unfriendly.  Somewhere between 5 and 10 miles, on the first of many loose rock-strewn trails, the sidewall of my rear tyre split. I stuffed a gel wrapper and a tube in there and got going again, hands covered in tubeless sealant.

Once at the next section of road I had trouble getting the chain onto the large chainring. Four or five of the teeth were bent, presumably an impact with another rock. I spent a few minutes searching for a suitable rock and then beating the worst of the bent teeth off the chainring in the hope I’d be able to use it and get my average speed up. I’d dropped loads of places now but I was content to spend the next 90 miles trying to catch people up…

I caught up with Ian Leitch, who’d also had some rear wheel-related woe. We exchanged pleasantries and as I rode off down the hill, I got a puncture on a sharp rock.

I fixed the puncture.

I carried on and passed some riders who I’d already passed once before.

Some time later, I got a puncture on a sharp rock.

I fixed the puncture.

I carried on and passed some riders who I’d already passed twice before – “hello again” I said. Things were getting a bit awkward now.

Then I went the wrong way at Ballough and ended up far, far away down the road in Sulby. Checked the map, turned around and carried on.

Then I went the wrong way at Kirk Michael and ended up even further away this time. Checked the map, swore, turned around and carried on.

I passed some riders who I’d already passed thrice before. “Ermm. Hello. Me again.” I said, trying to get away as quickly as possible.

Then I got a puncture. My bike was spending more time upside down than it was the right way up.

Then I remembered the fairies and got all irrational, ignoring the fact that my rear tyre was the same rear tyre that I’d ridden Mayhem on. It was ideal for the grass and woodland of Gatcombe Park and I’d not had time to change it for something tougher so here I was, lacking finesse, smacking it into large, pointy Manx boulders and blaming the whole fiasco on some imaginary, mischievous little people. Idiot. 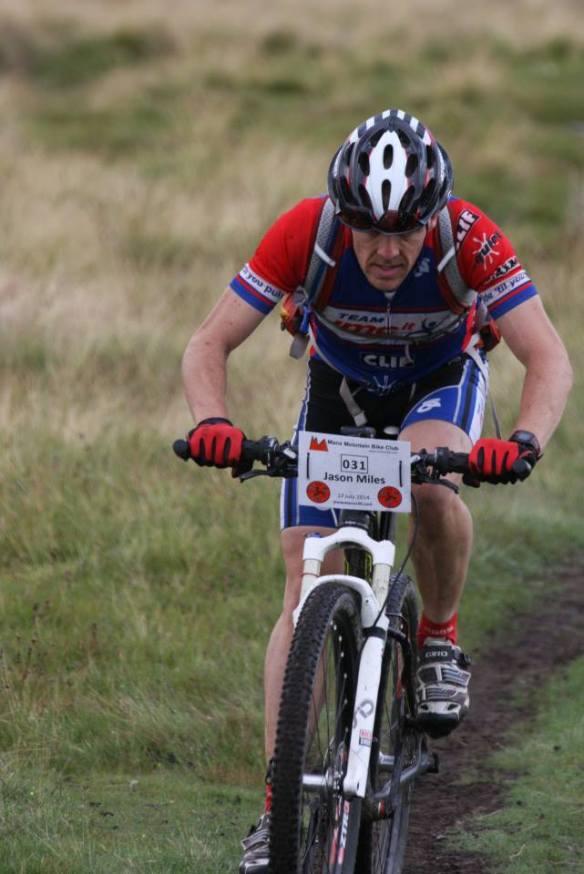 That last tube, as it turned out, already had a puncture. I muddled through for a bit and eventually it go so soft that a reasonably-small rock finished it off. So I started walking, sort of giggling.

A kind man gave me a tube. I was only a few miles from the checkpoint where the route split – there was a 100 kilometre version of the race so I’d decided to take that instead of trying to grind out 40-odd more miles without any more tubes and a 7pm ferry to catch. If I missed the ferry home I was in a world of grief so the decision to bail out was a very easy one indeed.

74 miles (I know! It’s not 100k is it?) and over 4000 metres of climbing later I arrived back in Douglas where the organisers had laid on pizzas and cake and it started to rain. The 100 mile winner arrived sometime later and some simple maths proved that I’d made the right call to bail out.

I caught the ferry home, trying not to worry about the shenanigans of those fairies…