After a rather chaotic couple of days packing for the weekend, sorting out kit for the race itself, building the new bike, setting off in the van then realising I’d not packed any clothes and completely forgetting my HR monitor we finally arrived and managed to pitch the tent before it went dark. Dave and Wayne arrived just in time for it to go dark 😉

Simon arrived on Saturday morning, Rich and Anne were just around the corner, we had a proper ‘hood 😉

After a couple of spins around the campsite, some umming and ahhing, comparing mine and Dave’s bikes and passing around of the Ragley TD-1  to Dave and Rich, I decided to give the 470mm carbon forks a go. They were much better handling-wise. Not quite as Brant had originally intended but I was much more positive about using the bike in the race as the change of fork transformed the bike for the better.

It was so good in fact that I only bothered to ride the spare bike (the Scandal) for one lap. The Ragley TD-1 was riding brilliantly through the muddy stuff, up the steep short climbs, fantastic at speed going downhill and much more comfortable than the Scandal over the bumpy bits. There were so many large exposed roots on the course but it really didn’t matter – I could just pop the front wheel up and over the obstacle and carry on, no worries.

It’s great, in other words. We’ll have a play with different forks in the near future to get it spot-on, so basically it’s an ace bike that can be made even better.

So anyway, the race starts and I simultaneously start to feel quite rough. I think the heat was getting to me and I wasn’t happy at all. 6 hours in and I’m thinking of calling it a day, when Deb tells me to ‘just try another couple of hours’. Once the sun started to go down I felt a lot stronger. I rode well thoughout the night, ate well and just kept going until the sun came out again….once again I started to feel sick and far too warm. Don’t worry. Not too long now. Just MTFU. 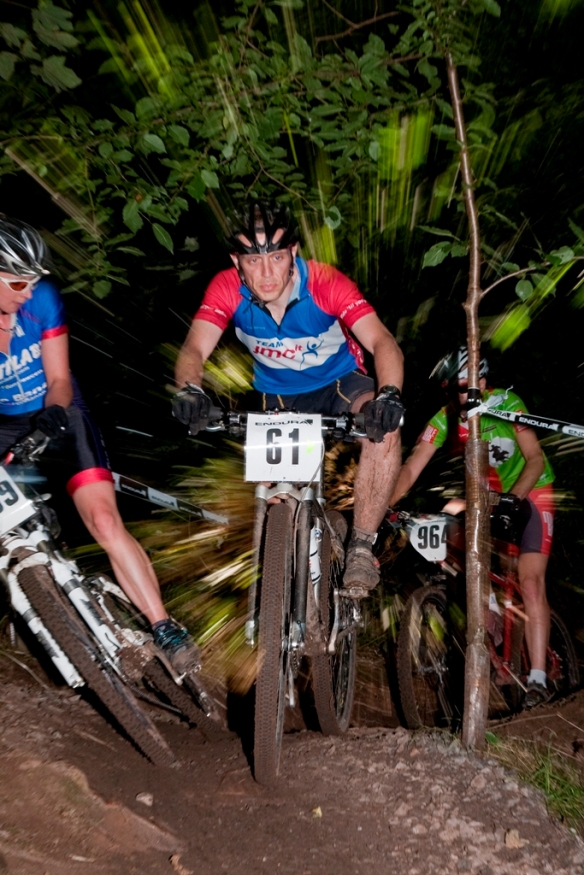 By about 8am I was in 2nd place, but only marginally. I dropped down into 3rd I think during a brief water bottle/chain lube stop and that’s where I stayed for the remainder of the race, each time I rode through the start/finish I was being cheered and encouraged by friends and strangers alike. It was ace, and on relfection quite moving.

Dave and Wayne gave me the Energy Gels Of Heroes and told me that there would be an outside chance of 2nd place if I crammed in 2 laps instead of one ‘lurking’ lap. So, rather reluctantly, that’s what I did. I say reluctantly because I thought I might die. The heat and pain was now really opressive – I felt like I had nothing left…at that point I got a bit faster. Not much, but a bit. Maybe 10 minutes per lap faster.

I finished in 3rd place 😉 No amount of energy gel was going to allow me to catch Mike Hall in 2nd. I completed 25 laps, just the one behind the winner, Rob Dean. 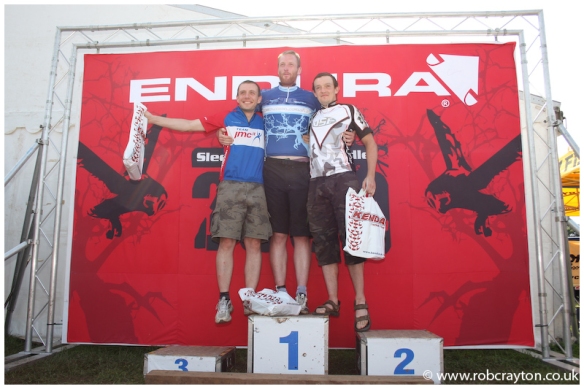 Despite my result, I was gutted for Dave who dropped out after a few hours, then dropped back in again when he started to feel better then rode at warp 5 for a bit. Too late for the result he really deserves but some impressively uber-fast lap times on the other Ragley protobike.

Simon did fantastically well (even though he would probably play down his achievement) finishing 6th place vet, 19th overall. He did that on a singlespeed too.

Finally, big shouts out to all the cheering folk; Andrew ‘Spider’ McHugh and Son, Rich, Anne, Gingerflash, Chris and the USE gang, Ben and Mark for the manic woohoo’s, Jenn, Trio, the guys and gals out on the course (particularly fellow soloist and birthday girl Clare Starkie for the regular words of encouragement), Mrs Sparkle, Andy for the use of the shower in his motorhome, Dave and Wayne, Brant for sorting me out with a great bike and most of all Deb and Mike for being the tippest-toppermost pit crew ever.

So that’s this year’s 24 hour races all done. Last year I wanted to improve my results but I probably wasn’t expecting a 2nd, 3rd and 5th in the three 24 hour events I entered so I’m understandably over the moon. I’m still going to be busy with the Manx End to End, Dusk Till Dawn, 3 Peaks Cyclocross, hopefully a few winter ‘cross races and of course some daft/epic training rides then preparation for next year, but for the next week at least I’m going to put my feet up.