Thankfully I was mistaken when I thought I was meeting Phil at Rooley Moor at 5am, the meeting time was actually 6 so I was afforded an almost-human setting off time of 5am rather than an inhuman 4am. Phil was late anyway. We started the climb of Rooley Moor (and thus began another circuit of the Mary Townley Loop) at about 6.20 after exchanging hello’s and Phil had ooohed and ahhhed at the Ragley for a few minutes…it was cold but so far the weather was looking ok. The only concern we had was that the big tailwind we were enjoying would eventually be a crippling headwind. That was hours away though. Crack on.

I had forgotten my glasses and neglected to fit a Crud Catcher. This meant that every wet trail was resulting in grit in my eyes and fast descents were being made especially interesting by the fact that I sometimes couldn’t see too well. No idea why I forgot my gigs. I just did. Like most things that appear to be potential disasters though, they seldom are.

Inevitably the rain arrived and in the space of around 10 blustery, eye-squintingly gritty minutes we were both immediatly soaked. Jumping off our bikes to feverishly pull from rucksacks and then don goretex jackets seemed necessary but also somewhat futile – once you’re soaked to the skin you can’t get any wetter after all… 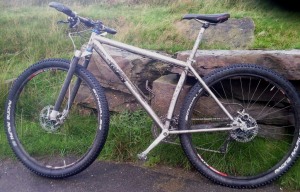 As predicted the last 10 miles or so of the route were ridden into the wind. Not too much to worry about normally but the conditions had somehow made this ride seem much harder than usual so it really wasn’t welcome at all. Still, we got our heads down and dug deep and finally reached Rooley Moor once again. We said our goodbyes and ‘well dones’ and I set off down the road, 12 miles through Rochdale and Bury past numerous chippies and bakeries that tortured me with the lovely aroma of stodge all the way home.