Another CX ride this afternoon, Cheshire – Manchester via the Peak District. Mainly on road with a bit of Hardcore Pennine Bridleway Lantern Pike Action in the middle. Not a particulary long ride, about 45 miles, but I must admit to feeling pretty weak. This was probably on account of my food intake before the ride consisting of cereal for breakfast, a toasted teacake for dinner then a crappy burger (I know, A BURGER) which was all that they had at the village fete we went to this afternoon. I had to eat something. it was the burger or the dog. At least they had that American plastic mustard stuff to take the taste of pigs’ bollocks away. 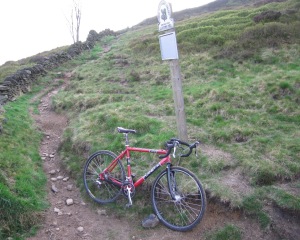 Luckily I had a gel with me on the ride but it just goes to show what a difference the right (or wrong) food can make.

As for the fete, it was good watching the trained dogs, watching my nephew run in a potato and spoon race (well? Have you seen the price of eggs these days?) and then getting soaked in the rain at the raffle. Won nowt. I had my eye on the Zig and Zag cuddly toys that were sellotaped to a bottle of Rioja as well.